Everyone leaving the 4:30 show of “Everest” at the Cinerama in downtown Seattle last Saturday looked wrecked. They kept exhaling, a few gripped and ungripped their hands, many asked aloud, “Why the fuck would you...?”

That’s asked of the mountain climbers in “Everest,” too, apologetically by Jon Krakauer (Michael Kelly), the famed journalist for “Outside” magazine who is writing an article on the paid expeditions of Mount Everest begun by New Zealander Rob Hall (Jason Clarke). At first, Krakauer’s question elicits hems and haws. Then, joking, they all point and yell in unison, “Because it’s there!” Finally, Doug Hansen (John Hawkes), the postman, gives an answer in his usual quiet, forthright manner:

I have kids. If they see a regular guy can follow impossible dreams, maybe they’ll do the same.

Everyone smiles and nods, and you get the sense that Krakauer has his lede—or at least a good anecdote for the story. 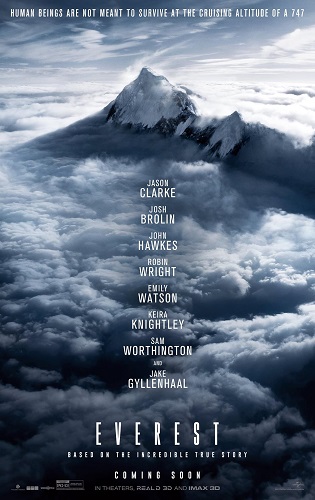 The unasked follow-up becomes more important as the movie progresses. And if you fail? And if you bring others down with you? What lesson have you imparted?

This is not the usual bullshit; it’s not a Hollywood story. Here are some lines from the trailer:

In most Hollywood movies, the guy would get moving, they would all get down together, the dude would come back. In “Everest,” the answers are: Nope, nope, nope.

Gripping
“Everest” is a felt movie; it’s a movie you feel in your bones. Its director, Baltasar Kormakur, directed “The Deep,” a 2012 Icelandic film about a fisherman who survives in impossibly cold waters, and my review ended thus: “You’ll be chilled to the bone. Bring warm clothes.” Same here. It’s an ordeal. It’s gripping. I know I kept gripping Patricia sitting next to me. It’s also stunning and beautiful, and worth seeing on the big screen. You’re amazed at all that beauty, and more amazed that anyone would risk everything to experience that beauty. You also sense that the beauty doesn’t care. The mountain doesn’t care.

We do. We have a short window to care about these characters, and Kormakur makes it work. I think it has something to do with the way they were written and the quality of the actors: Kelly’s dark-eyed stare, Hawke’s good-natured humbleness, Clarke’s professional calm. You sense quiet competence from them. From Beck Weathers (Josh Brolin), you get an outsized Texas personality, but that’s fun, too. He’s not my guy, but I enjoy him. He wears a Dole-Kemp T-shirt but I could hang with him.

Why this disaster—one of the worst in Everest's history—on this day? Four things:

Basically, if the storm hadn’t hit the delays wouldn’t have mattered to the extent that they did. If the delays hadn’t happened, most of the climbers would’ve made it back to camp in time. Eight people wouldn’t have died.

Were 1) and 2) a consequence of all of the other adventure companies climbing and profiting from Everest in Rob’s wake? That with this competition came cutting corners? That not everyone was professional in a place where you had to be professional or die? The famed Russian climber Anatoli Boukreev (Ingvar Sigurosson) gets off a good line early when the different adventure companies are fighting for space and time. “We don’t need competition between people,” he says. “The competition is between the people and the mountain; and the last word always belongs to the mountain.”

In the end, “Everest” is as cold as the mountain. It offers little in the way of solace. That's the harsh beauty of it.

It’s not on nearly the same scale, but I love hiking the mountains of the Pacific Northwest; and I think I love hiking because it’s arduous, it’s beautiful, and I feel better having done it. But I also hike because I’m good at it. Going up, not many people on the trail pass me; I pass them. It makes me feel good.

I think that’s why most of us do what we do. We feel good about being good at this thing, so we keep doing it. And I think that’s why these climbers did what they did. They were among the best in the world at it. But for some that wasn’t enough.

Bring warm clothes and someone to grip.