She should have told them sooner. Not for them; for us.

Eva (Julia Louis-Dreyfus) is a middle-aged masseuse in southern California, who, as the movie opens, has to endure, silently and in light-comedic fashion, her clients’ foibles: one woman gabs nonstop, an elderly man has bad breath, a young, fit man lives at the top of a long set of stairs but never bothers to offer a hand with her heavy massage table. She says nothing about any of this. Instead, she gives us the Elaine Benes tics and mannerisms: some combination of endurance for their foibles followed by “am I bad person?” regret for what she’s thinking of their foibles. 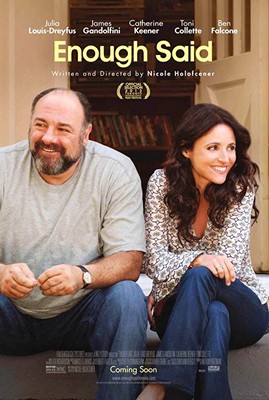 It’s not bad but it did remind me of “Seinfeld.” As did the masseuse thing. As did ... More later.

Early on, Eva attends a party with her friends Sarah and Will (Toni Collette and Ben Falcone), a couple forever squabbling about petty things, and there she meets both a new customer, Marianne (Catherine Keener), who apparently makes a living as a poet (the question that nobody asked that I’d ask? “How?”); and Albert (James Gandolfini), a sweet guy, who, like Eva, has an upfront-but-through-the-back-door kind of sense of humor. They connect in this manner. That’s the interesting thing about Eva: She tends to—as Elaine Benes would’ve said— blah all the time; yet it’s not talking, not being upfront, that gets her into trouble.

Despite not being attracted to Albert—he’s fat (stocky) and bald (bald-ing)—she goes out with him. And they hit it off. He’s funny, she’s funny. They talk like old friends. They talk, to be honest, a bit like George and Jerry on “Seinfeld”: about nothing and everything. At one point, Albert, who works at a museum of television history, bitches about one of those “Real Housewives” shows, and Eva agrees:

I liked them together. I liked him. He’s got a twinkle in his eyes and a gentleness in his spirit. He’s also the grown-up in the room. He’s got an acceptance of the foibles of the world, including, maybe especially, his own.

Marianne? The poet? Who is now Eva’s friend? Unaccepting. Her ex, for example, was also overweight, and he did awful things that drove her nuts. He liked guacamole, for example, but didn’t like the onions in the guacamole; so he used to put his chip in and swirl the guac until the onions were safely off to the side. Drove her nuts.

Up to this point I liked the movie. It was trying to be an interesting story about people like us: people whose bathroom mirrors have dried toothpaste spittle on them. Even at this moment, during this reveal, I thought, “Well, that’s an interesting coincidence. Let’s see what happens when she tells them.”

Except she never does. And that’s what the movie becomes: not telling them. Either one of them. She takes Marianne’s intolerance of her ex into her relationship with Albert and tries to change him. She brings up his lack of bedside tables, his many brands of mouthwash, his ... stockiness. She says she’s going to buy him a calorie book. “Why’d I get the feeling I just spent the evening with my ex-wife?” he says at one point.

Eva realizes the Albert/Marianne connection halfway through the movie but we’re near the end before she’s forced, by circumstances, to own up to it. But by this point, she’s already blown it with Albert. Not to mention us.

“I don’t like any of these people,” Patricia said near the end.

I liked Albert. I also liked Peter, Eva’s ex, played by Toby Huss, who looked immediately familiar to me. He should, he’s been in everything from “Jerry Maguire” to “42,” but I recognized him as Jack, Elaine’s twinkly-eyed boyfriend who turns out to be the B-actor playing “the Wiz” in the schlocky east-coast commercial “Nobody beats the Wiz!” on “Seinfeld.” Peter is another adult in the room.

Isn’t it interesting how the men are the adults? I’ve noticed this more and more in stories created by women, “Girls” particularly, where Adam and Ray are relatively stable dudes, while the girls of the title go off on tangents and on each other. “Enough Said” was written and directed by Nicole Holofcener (“Please Give,” “Friends with Money,” “Lovely & Amazing”), but the women in it are fairly awful. Marianne is carping and bland; she seems like she’s floating in an ether of nothing. Her daughter, Tess (Eve Hewson), is spoiled and rude. Eva is just small. Only Eva’s daughter, Ellen (Tracey Fairaway), is worth a damn.

Lessons are learned, I suppose, but they’re lessons we know. Eva learns she should speak her mind more. She asks the young massage client at the top of the stairs to help her with her table, and he does, apologizing profusely all the way. So that works. She tries to reconnect with Albert. The ending of the movie is the picture on the poster: the two of them sitting on his back steps, maybe together, maybe not. It’s an ambivalent ending for a movie that still feels all tied up in a neat bow.