The biggest problem for Dom Hemingway is Dom Hemingway—not the man but the name. Well, the man, too, but you have to start with the name. How can you not have a tendency toward grandiloquence and megalomania if you’re named Dom Hemingway?

Throughout the movie, Dom (Jude Law), an East End petty gangster and safe-cracker, keeps going through the same cycle. He’s so full of himself that he acts foolish, then he beats himself up for the foolish things he’s said and done while he was so full of himself. Rinse, repeat.

Put it this way: the movie opens with Dom singing a paean to his cock as he’s being blown in prison. 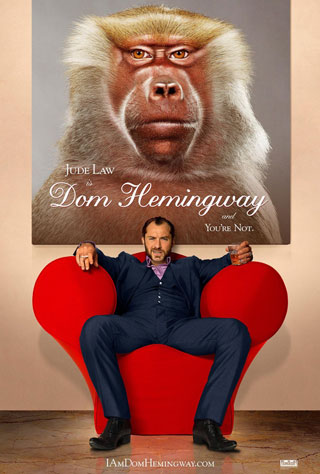 He compares his anatomy to a work of art—a Picasso, a Renoir, something that should hang in the Louvre. He says it should be studied by science, win a Nobel Peace Prize. He goes on and on. It’s a kind of masterwork, this soliloquy. It’s Hamlet as ass. More on this thought later.

A poor player
Shortly afterwards, Dom is let out of prison after 12 years. First thing he does? Finds a mechanic named Sandy Butterfield and, as he says, “makes Bolognese” out of his face. Was Sandy the dude that finked on him? No. He simply dated Dom’s ex before she died. He even paid for her tombstone. He’s an upstanding guy. But what do you expect from a guy who sings an extravagant paean to his cock?

The second place he goes is a pub, for a pint with his friend Dickie (Richard E. Grant), who also works for the gangster, Ivan Fontaine (Demian Bichir), that Dom didn’t give up in prison. He lost 12 years because of Fontaine. It still rankles. How much? Even after being presented with two beautiful prostitutes and cocaine and going on a three-day binge with all three, and taking the TGV with Dickie to the south of France for a meeting, Dom resents it. So much so that he belittles Fontaine. To his face. Calls him Ivana. And worse. He gets James Taylor on his ass:

For a moment I was vaguely intrigued. “Well, this can’t end well,” I thought. But it kind of does. If Fontaine is who everyone says he is, he’s not going to allow this—even after 12 years of loyalty. Particularly when Dom demands Ivan’s girlfriend, Paolina (model Madalina Diana Ghenea, who is so hot she’s nuclear), as partial payment. Instead, amid a few vague threats, Ivan forgives, then gives Dom three quarters of a million pounds for his 12 years, then is stupid enough to get into a car driven by a drunk/high Dom down a narrow winding road. In the aftermath, Dom has cost a life (Fontaine), has saved a life (Melody, Kerry Condon of HBO’s “Rome”), and has had his three-quarters of a million pounds stolen (by Paolina). So of course, despondent, he returns to London to try to win back his daughter (Emilia Clarke, Khaleesi from HBO’s “Game of Thrones”) and get work from the son of the gangster he was fighting all of these years. The cycle continues. It gets old.

That struts and frets his hour upon the stage
What doesn’t get old? The language. There’s a majesty to it, even if there isn’t to Dom. Before it all goes awry, Dom is in the pool with Melody. She tells him he has a noble chin and he says she has noble tits. She mentions her sister is an actress and he says he did a bit of acting, playing the apothecary in “Romeo and Juliet” at reform school. What I like is that by this point we realize Dom is a Shakespearean character. He even talks like one. “Misfortune befell me,” he says at one point. Look at the poster: He’s Macbeth with bad taste. He’s a low-end character with a high-end vocabulary.

I do think there's something Shakespearean about Dom. He's a larger-than-life character, who by his very nature just shoots himself in the foot. He destroys himself at every turn. If the movie is about anything, it's about, “Dom, just don't destroy yourself any more.”

But we know he will. The movie ends, as it began, on an up-note, another soliloquy:

After much heartbreak and ruin, the pendulum of luck has finally swung back to Dom Hemingway. And I intend to enjoy each moment of its fickle pleasure—whether it lasts for a minute, a day or a lifetime.

I’m betting a minute. Dom’s life is a merry-go-round. Our step off seems arbitrary.