Frédéric Tcheng’s documentary “Dior and I,” whose title is a play on Dior’s own memoir, “Christian Dior and I,” concerns the first haute couture collection from Belgian fashion designer and new Christian Dior S.A. creative director Raf Simons in the summer of 2012. It’s a behind-the-scenes look, a “How things get done” documentary, that misses, or glosses over, or assumes we know, the high drama surrounding it all. But we don’t. At least I didn’t. I had to look it up. I had to keep asking Patricia.

It’s rare when anything in our culture does this, by the way: ignores the gossipy drama for the quotidian detail. I feel like I should applaud.

Will the couture be haute enough?
Here’s the drama: In February 2011, Dior creative director John Galliano was recorded spouting anti-Semitic remarks to a Jewish woman, including “I love Hitler,” and “People like you would be dead today.” Two days later, the House of Dior suspended him. A week later, he was fired. Bill Gaytten was hired as head designer interim but his first show (for Fall-Winter 2011) was poorly received, and into this mess Raf Simons was hired to save the fashion house. 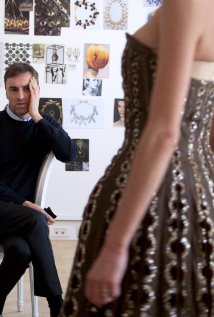 He had eight weeks in which to create his premiere fashion line.

Most of this backstory is glossed over. One wonders if there was a quid pro quo. Sure, kid, you’ll get access to the House of Dior ... just don’t mention Galliano.

The drama in the doc is much less scandalous. Raf (he’s always Raf) is hired away from Jil Sander, which makes ready-made rather than custom-designed clothing, so there’s some concern that his couture won’t be haute enough. He likes simpler designs than the more flamboyant Galliano. He’s also a bit distant, with doubt and concern in his eyes. He reminds me of some combination of a shorter Daniel Day Lewis and a minor James Bond villain. Plus he’s Belgian but doesn’t speak French? You don’t quite know what to make of the guy.

His right-hand man, on the other hand, Pieter Mulier, has big, wide-set eyes, and a quiet, friendly manner, and you find yourself warming to him even before the various Dior ateliers reveal their love of Pieter and their own doubts about Raf. For a time, I wondered if the Raf/Pieter dynamic would be like the Anna Wintour/Grace Coddington dynamic in R.J. Cutler’s excellent 2009 documentary “The September Issue”: the assistant who makes things work for the haughty boss. Nope. No one ever warms to Anna Wintour—it’s not encouraged by her nature or name—but by the end of this doc we warm considerably to Raf. Even before he breaks down. Even before he reveals his heart.

We get bits of the fashion-house history—Dior’s post-World War II “New Look” that took the world by storm—but nothing on when Dior died (1957), or how many creative directors the House of Dior has had (Raf is the seventh), or what premiere fashion shows generally look like. But this tendency to film the present rather than regurgitate the past reflects Raf’s own philosophy. “The past is not romantic to me,” he says at one point. “The future is romantic to me.”

Spray paint and duct tape
Shouldn’t it be “Dior and Us”? Early on, Raf says fashion is about dialogue, it’s a collaboration, and we get a long-running exchange between Raf, Pieter and the various ateliers who make it all work. (A direct translation of atelier, by the way, would be seamstress, but that’s a more loaded word in America, conjuring up immigrant drudgery rather than couture artistry.)

Dior has two head ateliers, both of whom manage large staffs and take care of not only the demands of Dior’s creative director but its many wealthy clients. At one point, for example, days before his premiere, Raf can’t find one of his head ateliers. Turns out she’s in New York. A client, who spends €350,000 a year at Dior, wants a personal fitting and gets one. That’s a fascinating dynamic. Which client do you serve: the wealthy patron or the creative director? Raf, at this point, feels short-changed.

There are other frustrations for him. Parisian engravers can’t give him the fabric he wants when he wants it. He recreates Dior’s classic Bar jacket in white but days before the show he wants to see it in black. Can’t be done, he’s told. So they improvise: they spray-paint it black. It may be high fashion in Paris, but we’re only a step or two above duct tape here. One of his more outlandish requests is a wall of flowers in the beautiful old French building where the premiere will take place. It seems absurd in theory but magical in practice. Maybe that’s what fashion is all about.

So? Is Raf’s premiere show a hit? It is, but I can’t tell you why, anymore than someone from, say, Togo, can tell you why the Seattle Mariners won last night. The skinny models are dressed up in Raf’s designs, they walk up the stairs and past the walls of flowers and the various studious celebrities in attendance; then there’s applause. And that’s it. Success! The new New Look.

Je n'adore pas “Dior and I” but I appreciate it. It’s about people who work. It’s an unglamorous look at the creation of the glamorous life.