Our B movies are coming back to haunt us. They’ve lived abroad for three, four decades, and they’ve affected—or infected—the way people see the states. These people are now making movies.

Here, for example, is what we learn about New York from writer-director Chen Sicheng's new Chinese action-comedy “Detective Chinatown 2.” Apparently if you duck into an Irish pub in Manhattan you‘ll find yourself in a biker bar—packed with tough, bearded dudes in leather, each of whom carries a sawed-off shotgun. Also, if someone threatens the Mandarin-Chinese teacher in Harlem, every black student in class pulls a gun. Every one.

The U.S.’s most recent and embarrasing export is also visible. Apparently New York City has a police chief who has messy strawlike hair, talks in a bullying manner, and mentions the need to build a wall along the west coast to keep the Chinese out. In case anyone missed the connection, the first time we see him he pops up in front of a giant portrait of Pres. Trump. 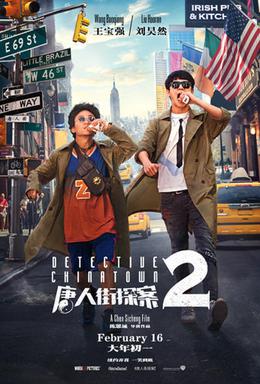 It’s another everything-but-the-kitchen-sink comedy that once again convolutes the mystery with a second mystery—or a second resolution. Just when you think it’s solved, nope, here’s another layer. Kind of an unnecessary one, too. But our leads continue to have good chemistry, even if one continues to be way over-the-top.

As the movie opens, our Beatle-banged and brilliant millennial, Qin Feng (Liu Haoran), a student now at the Chinese police academy, is using an international online app, Crimemaster, which has him ranked #2 worldwide. He’s in New York for the wedding of his former partner, and distant cousin (his great-aunt's husband's cousin's wife's nephew), Tang Ren (Wang Baoqiang), who isn’t really getting married. Though he greets Feng at the airport in celebratory fashion, with black bodyguards and a limo full of babes as is the American way, he just needs Feng to help solve a case.

It’s a creepy case. Someone is killing people and removing parts of their bodies: a liver here, a kidney there. Tang and Qin aren’t the only ones on it, either. Because one victim is the grandson of Uncle Seven (Kenneth Tsang), the longtime “Godfather of Chinatown,” who’s offering a $6 million reward for a resolution, we’re introduced to a virtual “Clue” board of potential detectives:

Most remain in the background except for the cute Asian hacker, Kiko (Shang Yuxian). She shows up when necessary to spring our heroes, since, with an early-but-acquitted suspect in tow, Song Yi (Xiao Yang), they are being pursued around New York by Uncle Seven’s larcenous nephew (Wang Xun) and his gang. Also on the case is a New York detective, Chen Ying (Aussie actress Natasha Liu Bordizzo), whom Tang Ren is sweet on. She, however, is interested in an American doctor, who shows up midway through, who’s played by Michael Pitt (“Boardwalk Empire,” “Funny Games”). As soon as I saw him, I went, “Well, there’s your killer; why else would he be in the movie?”

The answer to the crimes does for the Tao what “The Da Vinci Code” did with Catholic/Vatican history and “Se7en” did for the deadly sins: everything matches. Otherwise, our heroes race (or strut in slow-mo) in matching tan overcoats around Manhattan. I laughed at two recurring bits: an old forgetful sifu who mistakes Feng for a pretty girl and keeps complimenting him; and the western muscleman (Brett Azar), who asks how to say “Stop!” in Mandarin, and is told “Baba, da wo” (Daddy, hit me). He keeps saying it. Enthusiastically.

Meanwhile, the scene where our heroes steal a Central Park carriage and race through Times Square, shouting exuberantly, is almost a shout-out to America and Hollywood about the new status of Chinese cinema on the world market: We have arrived. Related: “Detective Chinatown 2” has already grossed $519 million in China. That's more than any comedy has ever grossed in the U.S.

唐 人 街 在 那 里？
The biggest problem with the film? At least abroad? Too broad. Again, I like the dynamic between Feng and Tang Ren, which plays off perceptions of new international China vs. old crass China. But Wang Baoqiang’s Tang Ren doesn’t make me laugh. Cringe, more like. He’s so over-the-top he makes Chris Tucker seem as subtle as a Michael Stuhlbarg character. I wish he'd tone it down a notch. Or 10.

Plus there’s just not enough Chinatown in “Detective Chinatown 2.” The title is a play off of Wang's character (Tang ren also means Chinatown), as well as the Chinatowns they‘re visiting (in Bangkok and New York), and I thought the series would give us the flavor of different Chinatowns around the world. Not. Maybe because Chinese audiences don’t want to see different Chinatowns? They want the exotic, not the familiar.