Deadpool is a snarky, profane former mercenary named Wade Wilson (Ryan Reynolds) who develops cancer and takes a tortuous, sadistic cure that makes him a superhero: both 1) impossible to kill, and 2) butt ugly. When his friend, Weasel (T.J. Miller of HBO’s “Silicon Valley”), sees him again, he tells him his mottled, hairless face looks like an avocado had sex with a much older avocado. He says he looks like Freddy Krueger face-f**ked a topographical map of Utah.

If that’s your idea of great humor, you’re in for a treat.

To me, “Deadpool” is like the superhero genre itself: It’s impossible to kill, and it’s gotten a little ugly. 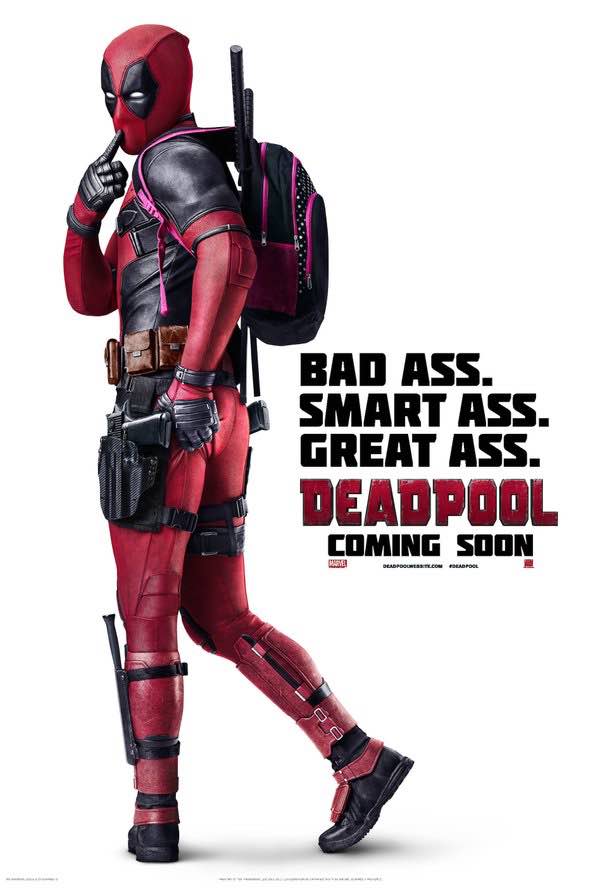 There’s a through line in superherodom that generally points toward the darker and grimmer: from the All-American families of Superman and Batman in the 1950s, to the wise-cracking of Spider-Man and the grumpiness of Ben Grimm in the early 1960s, to the even grumpier Wolverine and deadly seriousness of the Punisher in the 1970s, to the vigilantism of Frank Miller’s Daredevil and Dark Knight in the 1980s.

Deadpool, who showed up in 1991, takes it up a notch: He wisecracks like Spidey, heals like Wolverine, and kills like the Punisher. But his most obvious superpower is meta. He’s self-referential. He comments upon the rules of the genre from within the genre. The only thing he breaks more than bad guys’ heads is the fourth wall.

Example: This is right before the final act. The bad guy has kidnapped the girl (Morena Baccarin, num), it’s Deadpool to the rescue, but first he stops off at the Xavier School for Gifted Students (X-Men HQ) to pick up some reinforcements. Earlier in the movie, he’d encountered two of the X-Men—Colossus (two dudes: motion capture/voice) and a bored teenage girl called Negasonic Teenage Warhead (Brianna Hildebrand)—during his opening set-piece attack on a highway overpass, and they’re the only two around when he rings the bell. Deadpool talks up the size of the mansion, the facilities, then points out the obvious: “Funny,” he says, “I always see the two of you. It’s almost like the studio could only afford two X-Men.”

That made me laugh out loud, since I’d been thinking it a second earlier. And there are a lot of laughs here, even for a curmudgeon like myself. But is this a losing strategy? They’re not fixing the problems of the genre, they’re just making snarky comments from within the genre. It’s like Deadpool is winning the battle (this moment) but losing the war. He’s badmouthing the entire enterprise on its way down.

It would probably be worth it to parse why I like Spidey’s wisecracks but not Deadpool’s so much. Maybe because Spidey seemed to believe in something? Or he had a wider cultural vision? Deadpool is another character—like “Ted”—choking on the miasma of a bankrupt popular culture, and enjoying it either ironically (Wham!) or as a cudgel. He describes cancer, for example, as “Yakov Smirnoff opening for the Spin Doctors at the Iowa State Fair.” Right? Cuz Wham! good and Spin Doctors bad. Plus Iowa State Fair bad because you know what Iowa and state fairs are like. Even if you haven’t been to either. Especially if.

Good at what it does
The movie, directed by Tim Miller (his first feature), and written by Rhett Reese and Paul Wernick (“Zombieland”), has the same ironic tone. During the cancer treatment/torture scenes, we get “Mr. Sandman” on the soundtrack. For the stop-action opening it’s Juice Newton’s “Angel of the Morning.” The closing credits begin with Wham! (“Careless Whisper”) then get serious—that is unironic—with Salt-N-Pepa (“Shoop”).

You know Wolverine’s line, “I’m the best at what I do but what I do isn’t very nice”? “Deadpool” is good at what it does but what it does isn’t really worth it. There’s a disconnect here, a cultural schizophrenia. We know we shouldn’t like the things we like, so we mock them even as we indulge in them. At some point, is there a reckoning? Or do we just keep fooling ourselves until game over, man?