OK, for those who haven’t seen it: Ben (Viggo Mortensen) is the patriarch of six kids raised deep in the Pacific Northwest woods, and one of the things he counsels them on—besides hunting, climbing, surviving—is grammar: that the word unique, for example, doesn’t take a modifier, and interesting is a limp word that hides more than it illuminates. No wonder I was happy watching it. It’s a movie that cares about words, and books, and scholarship. It’s a movie that actually made me think, “I haven’t tried hard enough in life.” How rare is that?

Then we got to the last act. 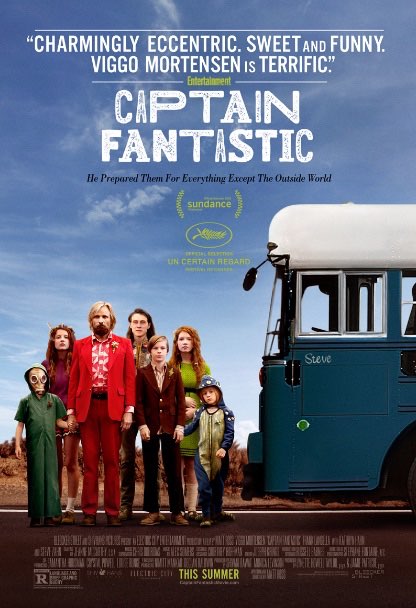 “Captain Fantastic” opens as eldest son Bo (George McKay) kills a deer with a hunting knife and is anointed by his father with the deer’s blood before eating its heart; then the carcass is transported back to camp, where all of its parts are put to use. That night, around the campfire, Ben and Bo strum guitars, while perpetually scowling middle child Rellian (Nicholas Hamilton) begins to bang an angry drumbeat. Everyone joins in. It’s like summer camp that never stops. It’s a white family living as they imagine Native Americans lived.

It's also boot camp for Noam Chomsky scholars. Ben is essentially a left-wing martinet—leading the kids on dawn runs, demanding excellence, and handing out Nabokov and Chomsky assignments. When they climb a sheer cliff that would give Ethan Hunt of “Mission: Impossible” pause, and Rellian slips and breaks his hand, Ben tells him to shake it off since there’s no one to help him. The boy’s resentment burns the screen.

A question that came to me after the family heads out in a beat-up bus for the funeral of their mother in New Mexico: What is all of this training for? To what end? His kids are superfit but unfit for modern life. They can recite and interpret the Bill of Rights, which is more than their dopey cousins can do, but they don’t know how most people live. Have they seen a web browser? Can they turn on a computer? “How did you kill those chickens—with an axe or a knife?” the youngest asks her aunt at a family dinner. At a trailer camp, after a make-out session with a pretty blonde, Bo gets down on one knee like a 19th-century balladeer and proposes; he's laughed at. “Unless it comes out of a book I don’t know anything!” Bo later cries to his stunned father.

(Some of this seems a reach. Is there no modern literature in Bo's curriculum? No Doctorow, Irving, Kundera, Roth? Surely the Nabokov helped.)

Ben’s bęte noir, his father-in-law Jack (Frank Langella), annunciates the dilemma. “Even if they make it through whatever it is you’re doing to them,” he says, “they’re going to be totally unprepared for the real world.”

He’s right. But I was still rooting for Ben. Then Rellian decides to remain with his grandparents, Ben sends one of the girls to kidnap him, the girl falls off the roof and nearly dies, and Ben, mortified, does what any loving parent would do: He gives up his kids and drives back home alone.

Wild world
I suppose it’s the other side of the same coin of Ben’s intolerant perfectionism. He raised his kids away from what he viewed as the impurity of society; but when he saw himself as part of that impurity, he removed himself from the equation, too. Thus:

This ending is way too neat for me, but the movie truly slipped away when Ben gave up his kids. (They return as stowaways on the bus.) I just couldn’t care about a man who would abandon his family that way.

I still recommend the movie, though. From the opening shot, writer-director Matt Ross (Gavin Belson of “Silicon Valley,” ironically) gives it the weight and randomness of cinema vérité; he gets great performances out of everyone, particularly the children; and he delves into an important issue: how to raise kids in an era of unrelenting consumerism and screens. His ending may be facile but his questions aren’t.