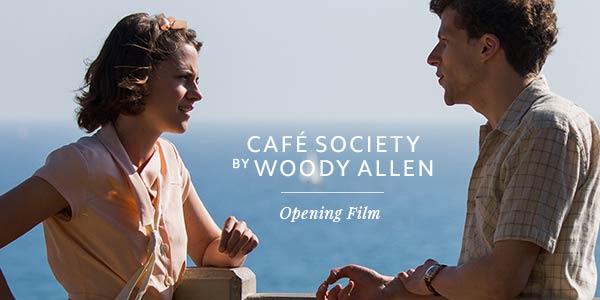 He's hardly a schmoozing nightclub owner; she plays love like it's a stubbed toe.

“Love fades” the old woman tells Alvy Singer after his first break-up with Annie in “Annie Hall,” and it’s a kind of horror for him: that even this greatest of human feelings is temporary; that nothing lasts.

“Could it be that love doesn’t end?” Bobby (Jesse Eisenberg) wonders three-quarters of the way through Woody Allen’s “Café Society,” and it’s a kind of horror for him, since he loves a woman, Vonnie (Kristen Stewart), who loves him (kinda sorta), but who’s married to his uncle Phil (Steve Carell). Must he carry this hurt through the rest of his life?

Bobby: Call Alvy. Or that old woman on the street. You’ll feel better.

Tin man
“Café Society” opened both the 2016 Cannes Film Festival, and, a week later, the 2016 Seattle International Film Festival (we’re sloppy seconds), but I imagine mostly for reasons of pedigree. It’s Woody, it’s got a great cast. That’s it.

It contains echoes of his earlier, better films. A New York Jew goes to Los Angeles, finds he misses New York, returns. But there’s no wit to it. Bobby doesn’t skewer Hollywood as Alvy did; it’s more of a shrug. The movie is a shrug. Like most latter-day Woody, it’s got a tinny, inauthentic quality. It’s propelled by narration (by Woody, as in “Radio Days”) that moves the characters around like chess pieces but delivers no emotional impact.

Bobby goes to LA to find work with his uncle, a Hollywood agent, who avoids him for several weeks, then gives the kid a job as a go-fer. Then he has his assistant, Vonnie, show Bobby around town. She does, he falls, but she’s got a boyfriend: a journalist who travels a lot. The boyfriend is a bit of a mystery. Watching, you think, “Who could it be? Who shouldn’t it be? Phil, right?” Yes, Uncle Phil.

But when Phil breaks it off with Vonnie, she’s distraught and finds comfort with Bobby. They’re about to move to New York and get married.

Then Phil changes his mind and takes her back. Heartbroken, Bobby returns to New York, where, inexplicably, and with the help of his gangster brother, Ben (Corey Stoll), he runs a high-end, hugely successful nightclub. Life goes on. He meets and marries Veronica (Blake Lively). Phil and Vonnie show up, with friends, and Vonnie is now like the name-dropping Hollywoodites he and she used to make fun of. Yet she isn’t. She’s still her (whoever that is). And she still loves him (whoever he is). And she tells him this when they go for a walk in Central Park.

One good line
Stoll is the best thing in “Café Society,” but his mob killings are treated as a kind of joke; and when he’s finally caught and sentenced to death, that, too, feels like a shrug. Our main characters are all stunned that their son/brother was a killer but don’t seem to care that he gets the chair.

Here’s a good bit: On death row, he converts to Christianity, since it has an afterlife and why take chances? His mother’s reaction—which is worse: the chair or the conversion?—is also good.

And one line made me laugh out loud. Bobby’s uncle is that classic, thin, New York Communist Jew of the 1930s who overthinks everything, and near the end, pontificating, he tells the table, “As Socrates said, ‘The unexamined life is not worth living.’” Then he adds, “But the examined one … is no bargain.”

That’s classic Woody. Which makes you realize how inconsequential the rest of the movie is.