Writer-director Lee Chang-dong’s last film, “Poetry,” was about the horrific death of a girl that happens off-stage. We never see the girl but we hear about her rape and death, and we see the blasé and calculating reactions of the people responsible. We also watch the old woman who tries to make it matter; who tries to truly see the girl even though she’s never met her.

“Burning” is also about the death of a girl that happens off-stage. And not only do we not see it happen, we really don’t even know if it happens.

Consider it an arthouse version of a revenge thriller. The revenge happens clumsily—not to mention less-than-heroically—at the 11th hour, and we’re not sure if it’s necessary. Traditional revenge movies are all about certitude and satisfaction. This leaves us with nothing but questions. 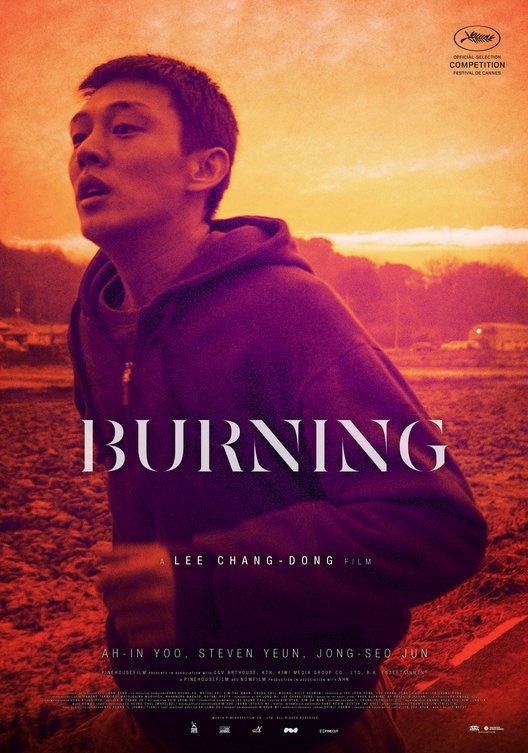 We first see her outside a department store, dressed in a cute, midriff-baring outfit, with another cute girl, involved in a kind of raffle. They’re drumming up business; that’s why they’re out there. It’s about a minute into the movie, and we’ve followed Jong-su (Yoo Ah-in), smoking a cigarette in an alley and onto this delivery. He’s thick-lipped, with an expression halfway between numb and stunned. He wants to be a writer but doesn’t know how to start. “To me, the world is a mystery,” he says later. It doesn't get clearer.

Initially, Haemi (newcomer Jeon Jong-seo) is a pleasant mystery. She eyes him, flirts with him. Hey, he wins the raffle! It’s a pink woman’s wristwatch. In an alleyway, smoking cigarettes, he gives it to her.

Turns out they know each other from their small village, and soon she’s taking him back to her tiny apartment. Does he sense something off about her? We do. Like an increasing number of young Korean girls, she’s had plastic surgery, and in her apartment she talks about that time in eighth grade when he crossed the street to tell her she was ugly. You think it’s a comeuppance moment: You thought I was ugly, now I’m pretty and flirting with you but you can’t have any of this. Bye. Instead she kisses him, sleeps with him. In their relationship, he’s quiet and passive; she does all the heavy lifting.

Then she’s off for a trek to Africa and he’s left to care for a cat he never sees. He arrives, fills the now-empty dish, then masturbates standing up. He’s biding time until she returns.

When she does, she does so with another boy, Ben (Steven Yuen), who is cordial enough but mostly smug, superior, amused. On the phone, he mentions something about his superior genes. In the audience, we do a double take. Did he really say that? It’s either a bad joke or a worse reality. We quickly suspect the latter.

All definitions are lost, and Jong-su doesn’t know how to ask the right questions to bring them back. Are he and Haemi a couple? Are Haemi and Ben? What’s his role? Even so, he keeps hanging out with them—he never sees her alone again—and the places they’re hanging out get ritzier, with more and more of Ben’s high-end friends. You know that scene in “High Fidelity” when Charlie Nicholson (Catherine Zeta-Jones) has John Cusack over, and there’s a dinner party in progress? “Everybody, this is Rob,” she says. “Rob, this is everybody.” This is like that. Our protagonists aren’t part of the crowd.

The key moment occurs at Jong-su’s father’s ranch. When he first goes there, we hear some awful, tinny noise in the background, and I’m thinking “Is that North Korean propaganda?” It is. The ranch is right on the Demilitarized Zone. Jong-su is looking after the rundown ranch because his father is in prison for attacking another man. His father, it seems, has a tendency to explode. We wonder if it runs in the family.

On the porch, the three smoke pot and Haemi takes off her top and twirls and dances; then she passes out on the couch. To Jong-su, Ben confesses a pastime: he likes to burn greenhouses. He’ll find an abandoned greenhouse nobody wants and torch it. “You can make it disappear as if it never existed,” he says. He says he has his eye on a greenhouse near Jong-su’s place. Jong-su looks around. Near? Very near, Ben says.

For a while, we see Jong-su running up and down the dirt roads near his father’s place, checking on all the greenhouses. Is he trying to protect them? Is he waiting until one burns up so he can alert the cops and get Ben out of the way? What he’s doing isn’t exactly proactive.

At what point do we suspect he's already lost? When he can’t get in touch with Haemi? As she was leaving his father’s place, he chastised her for dancing in front of them topless, saying only whores do that, and we suspect her absence is related to that. But then he can’t find her at her apartment, either. She's disappeared. Plus the landlord says she never had a cat and he can’t find evidence of the one he fed all those weeks. Did he merely dream the cat? The whole thing becomes dreamy, or nightmarish, with Ben is at the center of it. But Ben never reveals himself as such. He stays cordial, distant, supercilious. He’s always seems amused by Jong-su’s efforts.

And he has a new cat.

You can make it disappear as if it never existed.

Revenge is a dish
Any thoughts on the false ending? Jong-su does his amateur investigations and doesn’t get far, but far enough to strongly suspect Ben killed Haemi. Then he settles behind his computer screen and types. We see him from outside his window, and the camera pans back, and we get the building, and more and more of the city. It’s a classic ending shot, but it would leave most everything unresolved. Was Jong-su writing about Haemi? Ben? Was it fiction? Is this the way he finally becomes a writer—via this horrible mystery?

But the movie keeps going, and the son becomes the father. Jong-su explodes. He and Ben meet on a lonely wintry road, and as Ben is about to take control of the conversation again, Jong-su knifes him in the gut. Initially I was so confused that I thought it was the other way, that Ben had knifed Jong-su, but no. It’s our guy doing the deed. Then he stuffs Ben in his sports car and sets the thing on fire. He makes a thing disappear as if it never existed.

Shivering, naked for having disrobed and burned his bloody clothes, he drives away in his beat-up truck. And that’s the end.

Steven Yuen as Ben is getting acclaim from American critics groups, deservedly, but Jeon Jong-seo really anchored the movie for me. She anchored it with how off she was—in a breezy, believable way. It’s her first role.

“Burning” was a little too long for me, a little too dreamy. My mind began to drift. Was that Lee’s intention? It actually makes you want to watch the film a second time. To see what you’ve missed. I like thinking about it, though. The more I think about it, the more I like it.