At one point, as the sex scene continued into its second or third minute, I leaned over and whispered to Patricia:

When are these beautiful French girls going to put some clothes on so we can get back to the story?

I was only half joking. OK, I wasn’t joking at all. 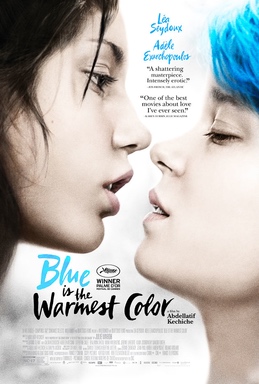 “Blue is the Warmest Color” is many things, including a coming-of-age story with feints into issues relating to homophobia and class, but it’s mostly a love story. It’s about the passion and pain and pang of first love, and in this regard the long sex scenes actually serve a purpose beyond getting asses on the screens so they’ll get asses in the seats. Remember when you first become involved with that special someone and you couldn’t keep your hands off each other? Right? And remember how boring you were? Probably not. But happy loving couples are dull, deadly dull, even in person. And on screen? Worse. There’s a reason dramatists keep the lovers apart. There’s a reason I don’t watch pornography: sex is generally a suspension of the story.

Even so, I admired the effort.

We get a good performance from Adčle Exarchopoulos, who plays Adčle, the main character, our eyes and ears. She has about a dozen faces in this film. At times she seems as young as 12 or as mature as mid-twenties. At times she seems too cute, at other times almost tomboyish or butch. Occasionally she looks very, very dumb. For a few scenes I actually thought she was unattractive. But for much of the movie, sans makeup, with her hair up, she simply looks lucious. It’s impossible to look at her and not think of the word “ripe.”

We watch Adčle go from being taught to teacher; from inexperienced to weighed under by experience; from unsure what she wants, to knowing exactly what she wants (Emma, the alpha female, played by Lea Seydoux), to no longer able to get exactly what she wants. It’s a lesbian relationship but it’s an everyperson’s story, too. I flashed back to my own youth many times in a way that I didn’t with, say, “The Spectacular Now.” Adčle’s story is specific but universal.

ADDENDUM: This is as far as I got in my review back in 2013. I think I got stuck because the movie was being lauded by everyone—it won the year’s best foreign language film from both NY and LA critics—and I just didn’t feel it, and I didn’t have the words, or the courage, to say so. I saw it seven years ago, in a movie theater that no longer exists (Harvard Exit), and my main memories of it are: 1) the scene where they meet in a park, 2) Adčle’s masturbation scene, 3) my joke to Patricia, 4) how long it was. Overlong. I guess that’s the main criticism I have. “Blue” is a vaguely interesting story about not very interesting people which goes on too long. Those are the simple words I couldn't find to say in 2013. Fin.