Which character do you think writer-director Ryan Coogler identifies with more: T’Challa/Black Panther (Chadwick Boseman), the hero, or Erik Killmonger (Michael B. Jordan), the villain? I’m guessing the latter. And not just because of the Oakland connection.

The best villains make you want to switch sides, and that’s Killmonger. His antecedent in the Marvel Comics movie world is Magneto—another Erik with a k (don’t mess)—whose “By any means necessary” stance vs. humans seems more pragmatic, or at least more dramatic, than Professor X’s bland accommdations. The historical antecedent, of course, is Malcolm and Martin. Hell, the only reason Killmonger is a quote-unquote villain is because he shows no mercy. He’s an asshole. If he weren’t, he might be preferable to T’Challa, who, like Prof. X, is a bit anodyne. He’s a comfortable king. 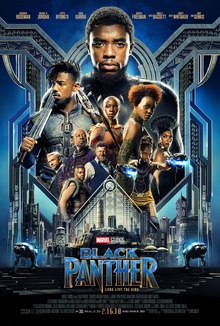 Indeed, as you hear the history of Wakanda—how they keep their riches and weaponry and tech hidden from the rest of the world—you go: Wait, what? Through the centuries? Through the slave trade? The fuck, Wakanda, how about helping a brother out? How about helping 100 million brothers out?

You know what that makes you? Killmonger before Killmonger even shows up.

The Biblical sins of Wakanda
So: Long ago, a meteor made of vibranium, the strongest substance in the universe (see: Captain America’s shield), crashed into Africa, and turned Wakanda into a superpower. And what did they do with this power? They helped their own. Instituted a kind of “Wakanda First” program. That’s the original sin.

The second sin takes place in Oakland in 1992. The king’s brother, N’Jobu (Sterling K. Brown), is there doing outreach but gets radicalized. He decides that maybe Wakanda shouldn’t just sit by; that it should arm the oppressed peoples of the world. For this, the king, T’Chaka (Atandwa Kani), kills his brother for treason. If the original sin has vague Biblical connotations (staying in Eden rather than being booted out), the second is exact: fratricide.

Cut to: present-day Wakanda. Remember how, in “Captain America: Civil War,” King T’Chaka had been assassinated? Yeah, me neither. Well, now his son, T’Challa, is set to take the throne. The five tribes of Wakanda gather by a shallow pool overlooking a majestic waterfall, where T’Challa stands stripped to the waist, ready take on anyone who wants to challenge him for the throne—to the death. That’s how they do. And guess what? Someone does: M’Baku (Winston Duke), of the all-but-forgotten mountain people. Of course, T’Challa wins, and of course he shows M’Baku mercy. And, of course, this act of mercy will help T’Challa in the third act—as acts of mercy in the real world tend not to.

Going in, I’d heard the first part of the movie has pacing issues, and it does. Several times I thought, “You know, you could lose this scene ... or this one.” But each time, that scene was revisited later in the film: the rite of succession; the Black Panther burial/dream. Too much of the story is then lost. But editing could’ve been tighter.

You know who I might’ve lost? Nakia (Lupita Nyong’o). Yes, romances between African-American characters in mainstream Hollywood movies are such a rarity as to be celebrated. But she doesn’t add much. She wants to do on her own, and keeps her distant from T’Challa, who is way too smitten around her. She’s not essential. Plus we‘re introduced to too many new characters as is. Thankfully, most of them are memorable:

I did look askance that they made T’Challa’s sister the Q here. Is this family keeping it all for themselves? Don’t they have any outreach programs?

The movie speeds up when T’Challa, Okoye and Nakia (with Shuri phoning it in) travel to Korea, to track Ulysses Klaue (Serkis), who’s trying to sell African artifacts to a CIA agent, Everett K. Ross (Martin Freeman, this movie’s Felix Leiter). It’s a good set piece/chase scene. They wind up with the artifact but lose Klaue. In the process, Ross is shot and brought to Wakanda so Shuri/Q can save his life.

In the meantime, Klaue’s partner, Killmonger, betrays and kills him, and delivers the body to Wakanda. He also reveals he’s Wakandan—the American son of the slain N’Jobu—and immediately demands a shot at the throne. So back to the shallow pool above the waterfall we go, but you already know where it’s heading. Killmonger wins, shows no mercy, throws T’Challa over the waterfall to the lamentations of the women. Now he’s king.

Nice rite of succession, Wakanda. Well, we elected Trump, so I can’t nitpick.

T’Challa as Zushio
I would’ve liked a more studied Killmonger at this point—someone ready to take power. I mean, wouldn’t you need Shuri/Q? Or does she have assistants? There’s a bit of wonderment as he takes over the throne, but it’s not enough. Mostly he just keeps glowering and bullying. He’s tearing down from inside before he can export out.

Meanwhile, mom, sis and GF (Ramonda, Shuri and Nakia) travel to the mountaintop to convince M’Baku, the would-be usurper, to take on the successful usurper. Instead, he gives them what they really want: T’Challa: in a coma, but alive. Vibranium cures the rest.

I also wanted a greater fire in the eyes from T’Challa here. Throughout, he reminded me a bit of Zushio, the young boy in the great Japanese film “Sansho the Bailiff,” who takes his father’s lessons on mercy to heart (“Without mercy, man is like a beast”), only to find himself bereft—a literal slave in a merciless world—because mercy wasn’t his to give. T’Challa was merciful, he lost everything to the merciless, but he comes back virtually the same. Dude: Get angry.

“Black Panther” is a cultural phenomenon (box office soaring through the roof) but merely a good superhero movie. It wouldn't make my top five. There’s no line as good as “There are always men like you” from “The Avengers,” nor anything as fun as rag-doll Loki from same. There’s no counselor as wise as Yinsen in “Iron Man,” nor a death as tragic. The lead isn’t as interesting as Tony Stark or Peter Parker. Or Hank Pym or Steve Rogers. Or Logan.

The standouts, besides Jordan’s Killmonger, are the women—particularly the super-enthusiastic Shuri and the super-badass Okoye, who stops a rhino charge like it’s a replay of Tianamen Square. And the ending works. T’Challa adopts a less radical version of Killmonger’s program and reveals Wakanda as a superpower before the world. That, in itself, is a victory for Killmonger. He lost the battle but half-won the war. Can you imagine something similar in other superhero movies? Reed Richards saying, “Hey, this planet-eating idea of Galactus’ isn’t bad.”

T’Challa’s outreach begins where we began the movie, in Oakland, which is where writer-director Coogan grew up, and where he first began reading “Black Panther” comic books. How cool is that? The kid brought his superhero home.