“Birdman” is one long unbroken shot after another. The camera swoops down hallways and past doors and through windows and up, up and away toward the sky. It’s a movie about an actor who once played a superhero, but in the movie the camera is the superhero.

“Birdman” is a movie about the making of a play, and each unbroken shot, you could say, is like a scene in that play. Scene i takes us through the falling stagelight and scene ii is “meeting journalists” and scene iii is the introduction of Mike. Even its backstage shenanigans feel theatrical. Is Laura pregnant? Will Mike and Lesley break up? Will Laura and Lesley leave Mike and Riggan for each other? 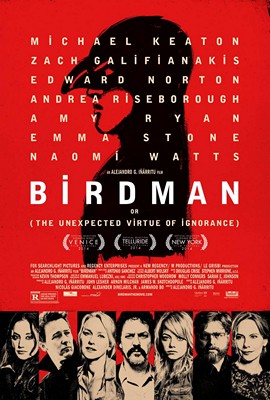 At the same time, it’s astonishingly cinematic. The movie is full of seeming contradictions this way. It’s full of echoes.

Twenty-five years ago, Michael Keaton starred in “Batman,” 1989’s biggest box-office smash, and, along with Christopher Reeve’s “Superman,” the forerunner to the modern superhero movie. He returned to the cape and cowl three years later for “Batman Returns,” then abandoned it. He went for more serious roles (“My Life”), or funnier roles (“Speechless”), or supporting roles in movies by hot directors (“Jackie Brown”); then suddenly it was 2005, superheroes were everywhere, and he was second-billed to Lindsay Lohan in “Love Bug” reboots.

Twenty years ago, Riggan Thomson (Keaton) played Birdman, the hottest superhero property in Hollywood; but after three films he abandoned the role and the world abandoned him. Now he’s trying to make a comeback by writing, directing and starring in a Broadway play based upon the short stories of Raymond Carver: “What We Talk About When We Talk About Love.”

He just has a few problems.

Feeling beloved on the earth
Start with the voice in his head. It’s deep and guttural, like Christian Bales’ Batman. “How did we end up here?” it asks. “This place is horrible. Smells like balls.” It’s the rebirth of Riggan’s Birdman. Or maybe he never went away. Maybe he’s been dogging the actor’s troubled mind since Riggan turned down “Birdman 4” all those years ago. Now Riggan is in a dingy, cramped dressing room while the TV blares news of Robert Downey Jr.’s latest multimillion-dollar deal for playing Iron Man. “We handed these poseurs the keys to the kingdom,” Birdman admonishes him.

Other voices in Riggan’s life are more ignored. Take the quote stuck in the bottom corner of his dressing-room mirror.

A thing is a thing, not what is said of that thing.

-- And did you get what you wanted from this life, even so?
— I did.
— And what did you want?
— To call myself beloved, to feel myself beloved on the earth.

In “Birdman,” written and directed by Alejandro González Ińárritu (“Amores Perros,” “21 Grams,” “Babel,” “Biutiful”), a thing isn’t a thing, it’s almost always what is said of that thing. Is the play any good? Depends what the New York Times critic writes tomorrow. Am I any good? “You’re beautiful, you’re talented, and I’m lucky to have you,” Riggan tells Lesley (Naomi Watts), one of his actresses, to calm her down and prop her up. It’s really only Mike (Ed Norton), the great stage actor, the wild card who may be superseding Riggan, who doesn’t have this overwhelming need to feel beloved. He wants truth, absolute truth, onstage, and throws fits when he doesn’t get it. When he plays “Truth or Dare” with Riggan’s daughter, Sam (Emma Stone), he always picks truth. No one is less beloved than the truth teller.

Riggan is torn. He recognizes talent, he wants truth, but he wants love even more. He once felt himself beloved on the earth in a way that was impossible until very recently, and the worst part of him, the Birdman voice, wants it back. At one point, he makes an awful confession. He tells his ex-wife, Sylvia (Amy Ryan), that he’d recently been on a flight going through severe turbulence. Passengers cried, prayed. George Clooney was on the flight, too, and all Riggan could think about was how headlines of the crash would be about Clooney, not him. It’s a devastating story, and Keaton tells it, finishes it, with a frozen half-smile that seems to realize how fucked-up it is, but with a relief that he got it out—that he told this awful truth inside him.

“I’m nothing. I’m not even here,” Riggan’s character says onstage as the love fades from his life. This is echoed in Riggan’s own life. “I’m fucking disappearing!” he shouts in his dressing room. “I’m the answer to a fucking Trivial Pursuit question!” His daughter admonishes him for not keeping up with the new power. “You hate bloggers, you don’t use Twitter, you don’t even have a Facebook page: You don’t exist.”

So many echoes. What about the ironic echo of the superhero costume? Before the final preview, Riggan, in his robe, steps into the alleyway for a smoke and the door closes on him and catches his robe. He can’t open the door and he can’t pull himself free. This itself is ironic—he once played a superhero but he’s not strong enough to tear fabric—and maybe more so because he actually imagines he has those powers. We first see him in his dressing room wearing tightie-whities and sitting in the lotus position in mid-air. An actor isn’t working out? A stagelight falls on him. “I made it happen,” he admits to his lawyer, Jake (Zach Galifianakis). We see this again and again—Riggan moving objects with a wave of his hand, Riggan levitating, and then, gloriously, flying—even though, like most of us, he actually controls little. He’s a schmuck. His zipper’s down, he burns his finger on a joint, Mike is getting all the credit for his play. And he can’t tear the fabric of his robe to break free from the stage door.

So he leaves the robe behind, and walks through Times Square to the front entrance in his tightie-whities. It’s a glorious scene—again, one take—with everyone raising their cameras high to record and upload the video for the world to see. Riggan literally lives the nightmare we all have—I’m in a public place ... in my underwear!—but it’s more than that. What is a superhero but someone who appears powerfully to the world in his underwear? But Riggan appears to the world in his underwear because of his powerlessness.

(The irony continues with all of those uploaded videos, which garner 350,000 views in a matter of hours. “Like it or not,” Sam tells him, “this is power.”)

There’s also the ironic echo of the superhero mask. Losing his mind, Riggan shoots himself onstage with a real gun, not a prop, but misses and gets his nose. When we see him in the hospital he’s wearing gauze and tape over his face. It’s essentially a superhero mask, but, like the underwear, a symbol of weakness rather than strength. When he removes the mask, he’s got a new nose. Birdman has a new beak. The question is: Will he soar?

We all want to soar above the mass, not be of the mass. At one point we get this dialogue:

Riggan: I was a shitty father, wasn’t I?
Sam: No, you were just fine.
Riggan [dismissive]: “Just fine.”

It’s as if this is the scale:

Who wants 3) when you’ve been 1)? Riggan was godlike both onscreen (as a superhero) and in life (a celebrity, beloved on the earth), and, in a sense, Riggan confuses 3) with 5). “You’re scared like the rest of us that you don’t matter,” Sam tells him. “And you’re right: You don’t.” She means he’s ordinary, a 3), but he sees it as 5): nonexistence. And maybe it is, if you’ve been 1). Which is why, in his mind, he keeps returning to 1). The less power he has, the more he imagines he has.

So after the final preview, and after his conversation with the Times critic in the nearby bar—she says he’s going to destroy his play, because she hates him and everything he represents, that tawdry Hollywood crowd “handing each other awards for cartoons and pornography” (great fucking line)—he goes on a bender and ends up on a rooftop and jumps off. And flies. He soars and the soundtrack music, usually discordant drumming, wells majestically. He becomes Birdman again. “You are a God,” Birdman tells him. “This is where you belong—above them all.”

But what do we make of the ending?

Up, up and away
Initially I thought it should’ve ended with the gun on the stage and the blast, and the camera slowly moving toward the sky. But Ińárritu keeps it going. Thank God. He lets his hero live, and we descend into the hospital room, where Riggan’s lawyer, his ex, and his daughter, argue over what’s happened. The ex thinks it’s all awful, but the lawyer is thrilled with the superlative Times review (its headline is the movie’s unnecessary subtitle, “The Unexpected Virtue of Ignorance”), while Sam tells him she’s set up a Twitter account for him, and he’s got 60,000 followers already. He’s quiet throughout, the man in the gauze superhero mask, but when they all leave he shuffles into the bathroom and removes the mask. He admires his new beak. Birdman himself is sitting on the (closed) toilet all the while, and silent for a change. He has no words. Then Riggan walks back into the room, opens the window, and jumps.

End? No, thank God. Sam returns to an empty room. She calls for her father, sees the open window, rushes to it and looks down. Nothing. Or so her face says. We’re just seeing her, not what she’s seeing. Then slowly, almost as if she’s worried she’s going to hit her head, she looks up. And her eyes get happy. And she smiles. And, as the screen goes dark, we hear a laugh, almost a giggle, escape her mouth.

So what is she seeing?

Throughout the movie, we assume Riggan’s superpowers are in his head. He’s destroying his dressing room with a flick of his finger, but when Jake arrives we see him physically doing it. He descends from the sky in front of the theater, but then a taxicab driver follows him inside demanding his money.

But here? Here we get corroboration. Of something.

Is it magic realism? Ińárritu is Mexican, and you know those damn Mexicans and their magic realism. Is it metaphor? He’s soaring again. In the press, online, in the world, he matters. Is it the Hollywood ending? One of my favorite moments—and really I’d wish there’d been more of it—was when Birdman himself breaks the fourth wall. He talks about us, the moviegoers, to Riggan. And this is what he says, as, in Riggan’s mind, meteors pelt the city and helicopters go swirling down and away, and a giant flying bird threatens everyone:

So is the ending simply more of that? Another Hollywood ending?

We know this much anyway. The movie begins with a falling meteor, representative of the hero, and it ends with the hero somehow ascendant in his daughter's eyes; somehow going up, up and away.