It would be tough to imagine a more light-hearted, lyrical movie about the horrors of the Chinese Cultural Revolution. Normally I’d cry bullshit, but writer-director Dai Sijie based the movie on his own novella, which was based on his own experiences being re-educated in rural Sichuan province near the Tibet border from 1971 to 1974. Plus the movie is just lovely. Plus he gives us the lovelier Zhou Xun in the title role. Not Balzac; the other one.

At times I was reminded of the Danish coming-of-age film “Twist and Shout.” In both, two boys, between capers, respond to world events (Cultural Revolution; Beatlemania) and feel the deep ache of first love. In both, there’s an illegal abortion. In both, you can’t help but fall in love with the girl, too.

I was also reminded of “Pygmalion”: men attempting to educate a provincial woman. There are layers upon layers of irony in this. The two boys, Ma (Liu Ye) and Luo (Chen Kun), are sent to Sichuan province to unlearn western values and learn the deep, simple truths of peasants as dictated by Chairman Mao. Instead, they steal western literature, Balzac chiefly, and inculcate the little Chinese seamstress (Zhou) on the very thing they’re supposed to be unlearning: western values. Near the end, they toast each other for doing this well.

How well do they do this? She leaves them. 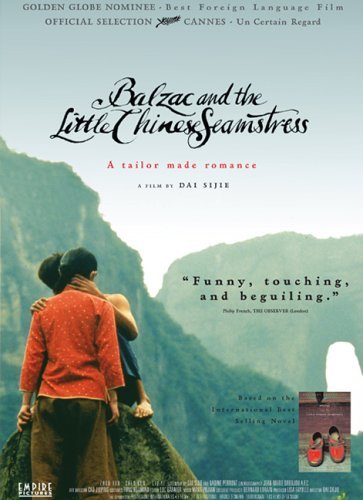 When they first arrive in the rural, mountainous village, one anticipates the worst. They’re out-of-their-element city boys whose very strength—their smarts—has been deemed a moral weakness, a plague upon the country and culture. A book they bring with them, a book of recipes for God’s sake, is torn up and thrown into the fire by the village leader (Wang Shuangbao) as being too bourgeois. He nearly does the same with Ma’s violin, too, which he thinks is a child’s toy, but Luo saves it. He says that it plays music. He gets Ma to play a Mozart sonata and lies about its provenance. He says it’s a mountain song entitled “Mozart is Thinking of Chairman Mao.” The violin is saved.

I kept expecting a comeuppance that never came. Yes, their job is to lug vats of liquid shit up the mountains, spilling it over themselves as they go, but soon the capers begin. They sneak to a nearby village to watch its girls bathing beneath a waterfall. One of them is the little Chinese seamstress, who becomes fascinated with the city boys. Soon they’re inseparable, and the boys take it upon themselves to educate her into the world beyond her own. They hear rumors that Four Eyes (Wang Hongwei), the son of an intellectual, apparently taking to reeducation well, has a secret cache of western literature. It’s true, they steal it, and in nearby caves they read her Dostoevsky, Dumas, Flaubert and Balzac. How much doesn’t she know? What Paris is; what France is; where Europe is.

More, because they have a talent for storytelling, they are tasked with going into town, watching North Korean propaganda films at outdoor cinema, then reenacting the story for the villagers. One time, Luo retells them a Balzac story instead. He gets them to shout out the title. It’s amusing. Rather than being re-educated from western influences, he’s educating them in western literature. And it has its effects. The seamstress’ grandfather, the old tailor (Cong Zhijun), creates embroidered garments. We see the seamstress trying on the first bra in the village. The world is opening up.

Both boys fall in love with the little Chinese seamstress, of course, but she begins a relationship with the more handsome of the two, Luo, who, at one point, leaves for two months to attend to his sick father. (There is much more mobility during the Cultural Revolution than I realized.) It’s then that she reveals to Ma that she’s pregnant. We’re walked through a series of Mao-era Catch 22s: Abortions are legal but only with a marriage certificate; but you can only marry after age 25 and our protagonists are just 18. So Ma, the son of a doctor, convinces one of his father’s colleagues to perform the service. For his help, he gives him Balzac.

What changes her
I love the way the movie moves. It ambles like a lazy summer afternoon but the story coheres; in the end, the pathway is distinct. It leads Ma, our narrator, to Paris, where he makes his living as part of a string quartet, and where, one day in the late 1990s, he hears news of the Three Gorges Dam project, which will flood the Sichuan village where he once lived. So he returns, with camera, to film what’s there, and to look for the little Chinese seamstress, with whom he’s still in love. Some of the villagers recall her, or the old tailor, but that’s it. There’s no sign of her. Then Ma flies to Shanghai for a reunion with Luo, who’s a doctor, married, and with a child. Years earlier, in 1982, he too went looking for the Chinese seamstress to no avail. They drink, watch Ma’s video, reminisce.

Then we get a flashback to the day she left. She leaves early and the grandfather wakes the boys, who run in pursuit. They catch her on the stone path between the verdant, vertiginous Chinese mountains, his hair cut short, wearing tennis shoes. Ma hangs back while Luo talks. We get this exchange:

She: I decided I’m leaving.
He: What changed you?
She: Balzac.

In the last part of the movie, this joint French-Chinese production, we see the video Ma took of the Sichuan village being flooded. The camera—Dai’s, not Ma’s—pans in, and we see the tailor’s old sewing machine, and the bottle of French perfume Ma brought for the little seamstress, being submerged. Underwater, the bottle twirls; it dances. Then, still underwater, we see a door open, and there are our protagonists as they were in the early ’70s: Ma playing violin while Luo reads Balzac to the little Chinese seamstress. The past isn’t buried, it’s submerged. It’s a final image so poignant as to be piercing.