This movie so wants to be a Quentin Tarantino movie.

Several people, pretending to be who they aren’t, arrive in an out-of-the-way locale for different reasons, get into conversations involving long monologues, and all of this is punctuated by sudden violence and bloodshed. Oh, and writer-director Drew Goddard (“The Cabin in the Woods”) also messes with the chronology. We see Person A shot, and 10 minutes later we get it from Person D’s perspective.

Even the title: “El Royale.” With cheese? 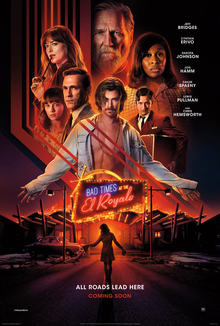 I have my issues with QT but he doesn’t bore me. This bored me a little. When the movie’s main villain, Billy Lee (Chris Hemsworth), hits the stage, holds the others hostage and plays games with their lives, all while keeping up a patter of pseudo-philosophy, Darlene Sweet (Cynthia Erivo) tells him he’s boring. She’s right: He is. Imagine saying that, or thinking that, about the monologues of Col. Hans Landa in “Inglourious Basterds.” You can’t.

Billy Lee, by the way, is a version of Charles Manson, Darlene Sweet is a version of Darlene Love, and the El Royale is a version of the Cal Neva Resort and Casino, which was co-owned by Frank Sinatra, and which (per the name) straddled the border of California and Nevada. It’s also a version of purgatory. For most it becomes a hell. Two escape.

Want one more? The El Royale is also a version of Gerald Foos’ Manor House Hotel, which Gay Talese wrote about for The New Yorker a few years back, but which (I believe) has since been debunked. Foos claimed to have created observation areas behind ventilation slats, through which he watched and wrote about his guests for decades.

Here, it’s a hallway, accessible through the manager’s office, where you can see each room via one-way mirror. Laramie Seymour Sullivan (Jon Hamm), pretending to be a loquacious vacuum-cleaner salesman, but in reality FBI agent Dwight Broadbeck, stumbles upon it. It’s 1969, and he’s been sent by Hoover to retrieve FBI bugs from the honeymoon suite, but discovers eight times as many as the agency left. Investigating, he finds the seemingly clean-cut concierge, Miles Miller (Lewis Pullman), high on drugs and asleep in his office. Then he discovers the passageway.

What are each of the guests doing?

Broadbeck is ordered by Hoover to ignore the kidnapping but sabotage everyone’s cars. Don’t quite get this last order. Is it part of the purgatory metaphor? No one leaves? Or is another FBI team on the way? Either way, they never arrive, and Broadbeck tries to do the right thing by knocking out Emily and rescuing the girl. Two problems: Emily isn’t knocked out and kills him with a shotgun; and the girl, Emily’s sister, Rose (Cailee Spaeny), is the real problem. She’s part of a cult. Basically, she’s Squeaky Fromme, her sister was trying to get her clean, but, freed, she phones Billy Lee, who, when he arrives with armed backups, begins his dull, dancy torture games in the lobby. Like Madsen in “Reservoir Dogs”? Either way, like Darlene, I was bored.

I shouldn’t have been. Toss in the tape of a prominent but dead leader having sex in the honeymoon suite (most likely RFK or MLK), not to mention the hotel’s unseen owners (most likely the mob), as well as the late reveal that Miles isn’t just an aw-shucks kid but a former Vietnam War sharpshooter with 123 kills to his credit, and it’s a good mix of fucked-up Americana. It should be way more interesting than it is.

Horrible things
I did like one line. After Father Flynn discovers the passageway, and the videotape, Miles is trying to confess to him. At this point, we think the kid is just a kid who’s carried water for the mob, or whomever, and that’s what he wants to confess. Either way, the Father isn’t a Father, but Miles doesn’t know that. He’s killed 123 but has kept his innocence or naiveté—sort of like a Vietnam-era Alvin York. And we get this exchange.

Miles: I’ve done horrible things.
Father Flynn (after long look): So has everybody. You’ll be fine.

Maybe with 30 minutes cut from its 141-minute runtime, and more lines like the above, we might’ve had something.