I can get behind bad moms; but “Bad Moms” is just bad.

It begins with Amy (Mila Kunis), a ridiculously pretty and super harried mom doing everything for everybody. She makes her kids breakfast, drives them to school, hands them their lunch (which she made) and their art projects (which she also made), goes to her part-time job (a kind of coffee company with a tech atmosphere), goes to a PTA meeting, goes grocery shopping, makes dinner, and helps the kids with their homework. The boy is spoiled and shrugging; the girl, 12, is anxiety-ridden about whether she’s going to get into Harvard. The husband is a T-shirt wearing, ruffle-haired doofus who is somehow also a high-paid stock broker. Plus he’s cheating on her. Online. Ironic since, in real life, men cheat online with Mila Kunis. 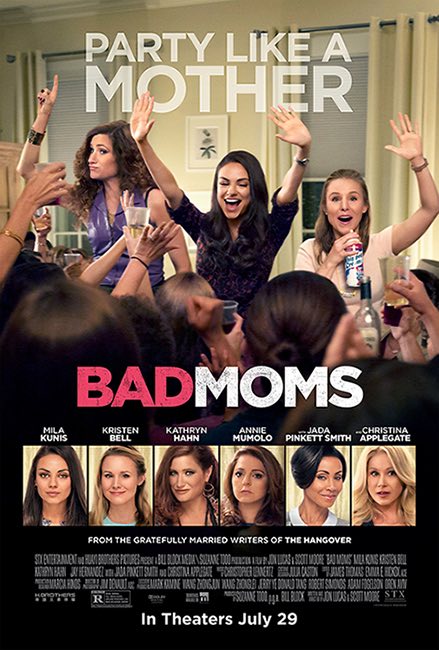 The point is she’s a ridiculous figure: nervous, forever running around in high heels, semi-cowed by the catty PTA moms, particularly the ultra-perfect PTA president Gwendolyn (Christina Applegate). Plus: she doesn’t allow her kids to grow the fuck up. She reminds me of Louis C.K.’s one-time nemesis, Jezandapuss’ “weak piece of shit” mom: “You’re raising Hitler, motherfucker, do your job!”

So what happens? She goes to the opposite extreme, of course. One day, like Popeye, it’s all she can stands. She refuses a task from the ever-demanding Gwendolyn, and she and two other moms go to a bar and get drunk. Then they go to a grocery store and create havoc—chugging a gallon of milk mixed with chocolate syrup, spilling half of it on themselves and the other half on the floor. They make a security guard flee and knock over a display. They abuse and harass minimum wage employees. All in slow-mo and to rock ‘n’ roll. It’s thesis/antithesis.

And in the final act? Right: synthesis. Plus all good things happen to her. She winds up with the hard-bodied Latino widower all the moms are crazy about (Jay Hernandez). She’s fired from her job but without her the company falls apart so she comes back at twice the salary + remote work days. Her daughter is pissed off but comes around; her spoiled son who couldn’t pour cereal makes a frittata; and she takes on and trounces the ultra perfect Gwendolyn for PTA president.

There are a few good jokes. But what a waste of opportunity from writer-directors Jon Lucas and Scott Moore, who are best known for writing “The Hangover.” They also gave us “Four Christmases,” “Ghosts of Girlfriends Past” and “The Change-Up. I think they owe us an apology.

Originally, the movie was supposed to be produced by Judd Apatow and star Leslie Mann, which could’ve worked. Leslie Mann would be perfect as the mom—nice looking but obviously a mom. Apparently Mila Kunis really is a mom, but c'mon. So the scene where she goes to a bar for the first time to try to pick up guys, and fails? Well, that ain’t exactly cinema vérité.

“Bad Moms” also does this odd thing of making everyone a cartoon, and then, in defeat, allowing them a sliver of humanity. So hubby Mike (David Walton) is a super-doofus until, post-divorce, Amy needs help and a hug; then he morphs into a regular guy. Gwendolyn is a major bitch—actually planting pot in Amy’s daughter’s locker to get her kicked off the soccer team—but after she loses the PTA-ship to Amy she cries in her car, and the two women bond. Then Gwendolyn takes Amy and her friends on her private plane because Hollywood has no clue what it’s like to be a person in America in 2016.

Five years ago, Kunis blew us all away in “Black Swan.” Since then? “Friends with Benefits,” “Oz the Great and Powerful,” and “Jupiter Ascending. And this. Who is helping her choose her movies—Ashton Kutcher?