“Avengers: Age of Ultron” is a good comic book movie with interesting themes, smart dialogue, kick-ass action sequences and a few overlong and dull romantic subplots. Writer-director Joss Whedon throws it all in there. The Avengers big battle is less with Ultron than with the kitchen sink. 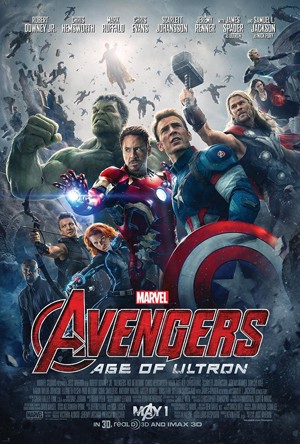 It’s ironic that puppets on strings are a theme here, since you sense the corporate hand in moving the Avengers about the globe for international box-office advantage: first Eastern Europe, then Africa, then South Korea. To Marvel’s credit, two of the battlegrounds are fictional, Sokovia and Wakanda, where, no matter how good the movie, the box office will be zero.

Although maybe I’m just being cynical. Maybe the Avengers are moved about the globe to live up to the “Earth” part of “Earth’s Mightiest Heroes.”

What you fear the most
Could meet you halfway

The movie begins in medias res, with the Avengers in Sokovia attacking a castle and bantering amongst themselves. It’s a bit confusing. There’s some guy named Strucker (Thomas Kretschmann), who’s been experimenting on people? And in the process has created two new super-powered beings: Pietro/Quicksilver (Aaron Taylor-Johnson) and Wanda/Scarlet Witch (Elizabeth Olsen)? Even though these two are mutants in the Marvel universe? At least we get a good Whedonesque line. Strucker: Can we hold them? Flunky (hands in the air): They’re the Avengers.

After the castle’s defenses are breached, Tony Stark (Robert Downey, Jr.) comes across some doohickeys in a basement lab, where Wanda puts a spell on him, making him see what he fears the most. In his case, it’s the Earth attacked, the Avengers dead, himself guilty. Back at Avengers headquarters in midtown Manhattan, this fear propels him to create Ultron, which he foresees as “a suit of armor around the world.” Except he and Bruce Banner (Mark Ruffalo) can’t make it work after, like, a couple days. So while they’re at a swanky party on the top floor of Avengers headquarters—nice cameo from Stan “The Man” Lee as a drunk WWII vet—Ultron (voice of James Spader) creates himself, then defeats Jarvis, Stark’s mainframe computer program, in a battle of the computer programs. It’s like Mac vs. PC. (Ultron, evil and full of bugs, is obviously the PC.)

Eventually, our heroes track Ultron to Wakanda, Africa, which has a rich source of vibranium, and which was used to create Captain America’s shield. Ultron wants it for ... himself? I guess? Anyway, there’s another all-out battle, and Scarlet Witch gets into the heads of most of the rest of the Avengers, and they have bad visions. Thor is stuck at an Asgaardian party, for example, while Captain America is stuck at a World War II-era party. So not exactly the worst visions in the world. Then an annoyed Hulk and a supersized Iron Man battle each other and destroy a small city.

Third battle’s in Seoul, where Ultron is trying to create a humanoid figure for himself, with skin and everything. Although since his goal is to destroy the human race, why would he want to appear more human? Either way, the Avengers steal the in-utero project, and use it to recreate Jarvis, who is renamed the Vision (Paul Bettany). Then the final battle, in which Ultron lifts a huge chunk of Sokovia into the sky in order to drop it and recreate the global dust cloud that killed the dinosaurs. This time for us.

Psst. The Avengers stop him in the nick of time.

Grace in our failings
I liked the oddness of Ultron. He’s buggy. At one point, in a big speech, he even seems to forget the word children.

But I don’t think Whedon does enough with this. Most of Ultron’s schtick is generically malevolent: “Your extinction,” etc.

I also like how Ultron and Vision are the best and worst aspects of Tony Stark, but again Whedon doesn’t do much with this. Sure, in Wakanda, Ulysses Klau notices Ultron’s Starkian similarities and gets his arm ripped off for the effort. And Ultron does have a slower, more methodical version of Stark’s laser-sharp wit—as when he considers what humanity has done with vibranium. “The most versatile substance on the planet,” he says, “and they used it to make a frisbee.”

This bit of dialogue between Vision and Ultron is probably the best in the movie:

Vision: I suppose we’re both disappointments.
Ultron [chuckles]: I suppose we are.
Vision: Humans are odd. They think order and chaos are somehow opposites and try to control what won’t be. But there is grace in their failings. I think you missed that.
Ultron: They’re doomed
Vision: Yes... but a thing isn’t beautiful because it lasts. It is a privilege to be among them.
Ultron: You're unbearably naive.
Vision: Well... I was born yesterday.

It’s also the key to why I wasn’t exactly thrilled with the movie. “There is grace in their failings” is a great line, but for the Avengers here, as for most heroes in most roller-coaster movies, failure is not an option, while most of the main characters are forced to stay alive for the sequel. Where’s the surprise? Nowhere. We exult in the ride, but there’s not exactly grace in it.

I have to hand it to Whedon, though. He gives us the kitchen sink yet somehow leaves us wanting more. One word more, to be precise.