Kai helps his parents with their noodle shop but he’s focused on his girlfriend, who, alas, is now in Paris. (She’s the one who left by taxi to start the film.) Kai wants to impress her so he spends his free time on the floor of a bookstore learning French; then he leaves her long-distance voicemails in stilted French reminiscent of the Colorado postal carrier in “Paris, je t’aime”—“Bon jour, Faye. Sans toi, Taipei est triste, tres triste”—before lapsing back into Mandarin. We see him leave several such voice mails. She never picks up. Not a good sign, bro. 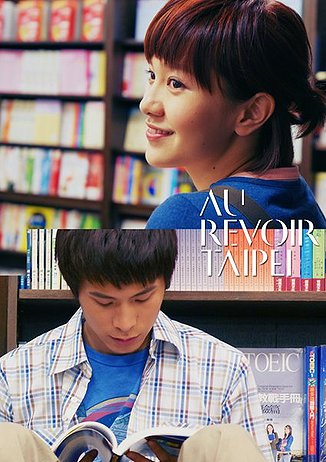 But at least there's another girl, Susie (Amber Kuo), who works at the bookstore and teases him about his floor sitting. “This isn’t a library, you know,” she says. She quickly develops a crush on him, but, though she’s cute, he can't be bothered. He’s interested in the girl who isn’t there.

Meanwhile, Kai’s friend, Gao (Chiang Kang-Che), a sweet, supertall, mouth breather, has a crush on a fellow employee, Peach, at the convenience store where they both work.

Meanwhile, a full-of-himself cop, (Chang Hsiao-chuan), takes his girlfriend for granted until she leaves him.

Meanwhile, a neighborhood gangster, Bao Ge, near retirement, and fronting a legitimate real estate business, has fallen in love and agrees to one more score before he’s done.

Meanwhile, the gangster’s nephew, Hong (Ko Yu-Luen), wearing the orange pants and vest of a real estate agent, and about to inherit his uncle’s legitimate real estate business, wants a piece of the illegitimate action, and, with his ne’er-do-well buddies, all dressed in orange suits with big blue ties, plots to rob his uncle of his last, big score.

All of these elements collide one hilarious evening.

Writer-director Arvin Chen has a good visual shorthand. When Kai finally gets through to Faye, for example, we see him in his room, pacing and talking. Then he stops pacing. “Why?” he asks. Cut to: Kai in bed, crying.

Determined to fix their relationship, he asks his parents for the money for a plane ticket to Paris but they scold him for being impractical. So he goes to Bao Ge, who, amused by this neighborhood kid, and nostalgic about his own loves—first or otherwise—loans him the money. Then he asks a favor.

Kai is supposed to take a package with him to Paris, but the exchange is handled clumsily, and watched by both the cops and the nephew’s ne’er-do-well gang. Everyone gives chase. Kai and Bao bump into Susie, but, Gao, slow and intent on food, is subsequently separated from the others and kidnapped by the orange-suit gang—although these guys come off less as gangsters than confused high school kids on a caper. “What do we do with him?” one asks. Pause. Longer pause. Finally Gao, with a vague, uncertain lilt, speaks up: “Just drop me off anywhere around here,” he says.

Tied up in a hotel room, he shares restaurant information with the gang while they give him relationship advice about Peach. They play mah-jong and he trumps them. “I told you guys,” he says. “I have mad mah-jong skills.” He’s like a pleasant, less-icky version of Napoleon Dynamite.

Is too much of the film derivative? Along with “Napoleon Dynamite” and “Paris je’taime,” I caught whiffs of early Woody Allen in the whimsical soundtrack and Wes Anderson in the tone, camera placement, and the uniformity of clothes (here: orange suits) as a running visual gag. One joke comes directly from “Midnight Run” while the ending is reminiscent of the ending of “Slumdog Millionaire.” Everyone dances.

Chekhov notwithstanding
Even so, I had a great time watching “Au Revoir, Taipei.” The actors who play Gao and Hong are both hilarious, while the romantic leads are cute and sweet. One could call Amber Kuo’s Susie the quintessential Taipei girl: feisty, pouty, fragile. You fall in love with her and want to smack Kai for taking so long to fall in love with her.

It’s a world full of passivity and best-laid plans but mostly it’s a very safe world: broken hearts are easily mended, young gangsters and cops are easily distracted, and the gun introduced in the first act doesn’t go off in the third.