At some point I began to feel less antipathy toward, and more sympathy for, the people who made “Atom Man vs. Superman.”

Tough gig. With a miniscule budget and B actors and little time, you have to create a 15-chapter story about a super-powered being, Superman (Kirk Alyn), battling an evil scientist, Lex Luthor (Lyle Talbot), where, at the end of each chapter, the hero, or the hero’s friends, are in grave danger. You have to figure out the trap and you have to figure a way out of the trap that—most important—maintains the status quo. Everything has to stay the same but there has to be tension, conflict, and peril throughout. The rhythm of the series is thus: clash, separate, regroup; clash, separate, regroup. Until the final chapter when the hero captures the villain and we get to see the loveliest of words onscreen: The End.

How do you do this? How do you offer constant conflict and resolution while maintaining the status quo?

You make your characters pretty dumb.

The dumbest character
The characters in “Atom Man vs. Superman” are pretty dumb. No thug of Luthor can ever shoot Jimmy Olsen or Lois Lane. 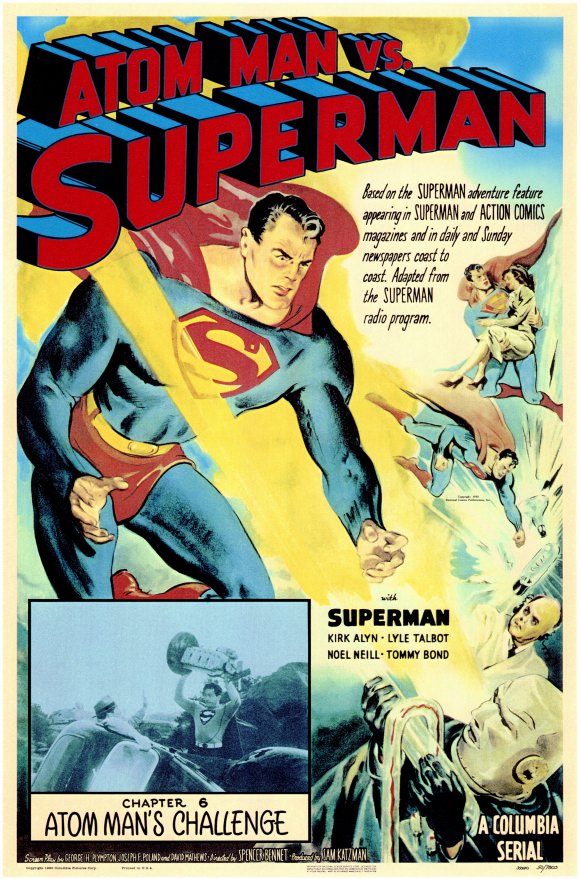 They have to leave them unconscious in a van that gets blown up or in a warehouse filling with gas or in a barn filling with exhaust.

Superman, meanwhile, can use his amazing powers to get out of predicaments but never to capture anyone important. At the end of Chapter 4, for example, “Superman Meets Atom Man!,” Superman is forced into “the Main Arc,” which teleports its occupants into “the Empy Doom,” a kind of proto-Negative Zone, where one’s “lost atoms will roam forever.” At the same time, Lois is placed unconscious in a car hurtling toward a cliff. How will she be saved? By Superman, of course! But, wait, wasn’t he transported into the Empty Doom? A little too pleased with himself, Superman explains:

His machine didn’t affect me! My atomic structure is different than that of human beings. … I just moved so rapidly I became invisible to the naked eye!

Every kid in the audience: “So why didn’t you just grab Atom Man while you were at it? Or why don’t you go back to his hideout now? You know where it is, dude. You just left it.”

Instead, he gets in the car and drives Lois back. You read that right. Plus he forgets all about the hideout. Until he needs to find it again. But he can’t find it because it’s lead-lined. Which would seem to be a giveaway even if he hadn’t been there before.

Lex Luthor? Brilliant scientist, etc. Here, he actually invents the transporter beam 16 years before “Star Trek.” “This apparatus,” he says, “can accomplish the transmission of matter over short distances. Its secret ray breaks down the component atoms and reassembles them here.” He’s got ray guns that start fires and cause earthquakes, and he’s got the main arc, and he’s got a spaceship, a fucking spaceship in 19-fucking-50; and yet after he’s successfully transported Superman into the Empty Doom, and Superman’s image appears on TV, he buys into the scam that the image is live rather than taped, and he sends a lacky into the Empty Doom to make sure Superman is still there. Guess what? He is! And Superman uses the open channel to return to return to Earth! D’oh!

Even so, there’s no contest about who the dumbest character in “Atom Man vs. Superman” is. Perry White (Pierre Watkin) gets everything wrong:

Does Perry White get anything right in this series?

The frightful, pointless Atom Man
According to Glen Weldon in his book “Superman: The Unauthorized Biography,” the movie is actually based on a storyline from the Superman radio series. What’s the story? I guess Luthor wants money and power, and I guess Superman does what he can to foil him, and I guess the Planet reporters are after a scoop.

In many ways “Atom Man vs. Superman” feels cheaper than the previous Kirk Alyn serial, “Superman” (1948). We get more stock footage (floods, fires). We get redos from the first serial: Clark Kent ducking behind a file cabinet and emerging, a second later, with a dancer’s lightness and a triumphant blast of music, as Superman. An entire episode is devoted to Lex Luthor telling his assistant, Carl (Rusty Wescoatt, who also played a henchman in “Batman and Robin”), the story of Superman’s origins on Krypton, which lets the producers re-use that footage.

Sure, for the first time, we get close-up shots of Kirk Alyn as Superman flying, steadying his arms, looking down with concern; but when he flies Superman is still mostly a cartoon. As is the flying saucer. That’s right. Luthor also has a flying saucer. Forgot to mention that. He winds up shooting it at the Daily Planet airplane to blow it up. You’d think flying saucers grew on trees.

Luthor has a secret identity in this one, too: the titular Atom Man, a frightful being in a … Naw. He’s just wearing a mask that looks like a totem-pole head. It looks like they took a jug, cut in eyeholes and a mouthhole, sprinkled on glitter, and plunked it on Lyle Talbot’s poor head. You know the scene in “Duck Soup” where Groucho gets his head stuck in a pitcher and Harpo draws a Groucho face on it? Like that.

So what’s the point of Atom Man? Why ever be Atom Man when you’re Lex Luthor? I’m not sure. Maybe they needed the character for the title. Maybe the atom bomb was all the rage in 1950, the year after the Soviet Union detonated theirs, and that’s why exploding atom bombs dominate the opening credit sequence. Was this the first use of A-bombs as entertainment? Is this how we reduce what’s fearful to us? By letting Hollywood producers have a go?

Atom Man is also necessary because, for much of the serial, Luthor pretends to go straight. He’s caught in Chapter 1 and paroled in Chapter 3, where, outside the prison, he tells the waiting press, “I’ve invested in a television studio. My inventive genius will revolutionize the business!” He then uses the TV truck as a means of spying on the city. He even hires Lois Lane as a woman-on-the-street reporter, asking passersby questions such as, “Is city life more exciting than country life?” I.e., revolutionizing the business.

Luthor’s investment, by the way, makes total sense given the genre and the year. “Atom Man” was the 43rd Columbia serial. They would make 57 of them, the last in 1956. What killed the serial star? TV, of course. Superman may fight Luthor here but the serial’s producers knew who the real enemy was. 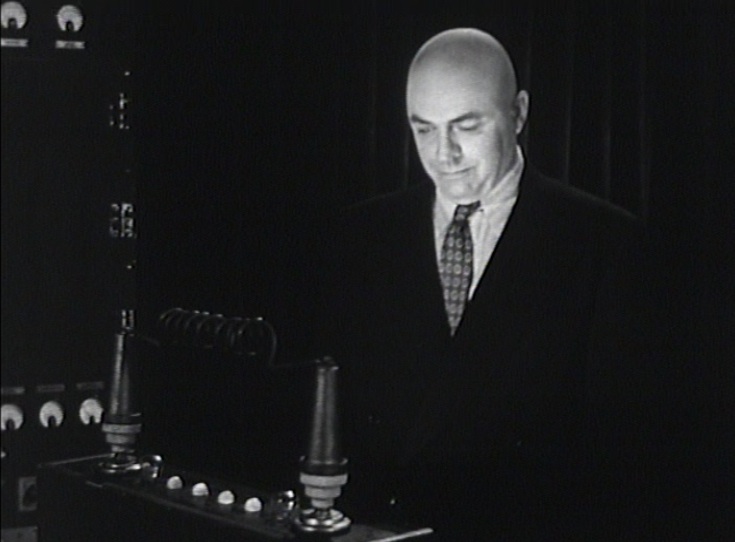 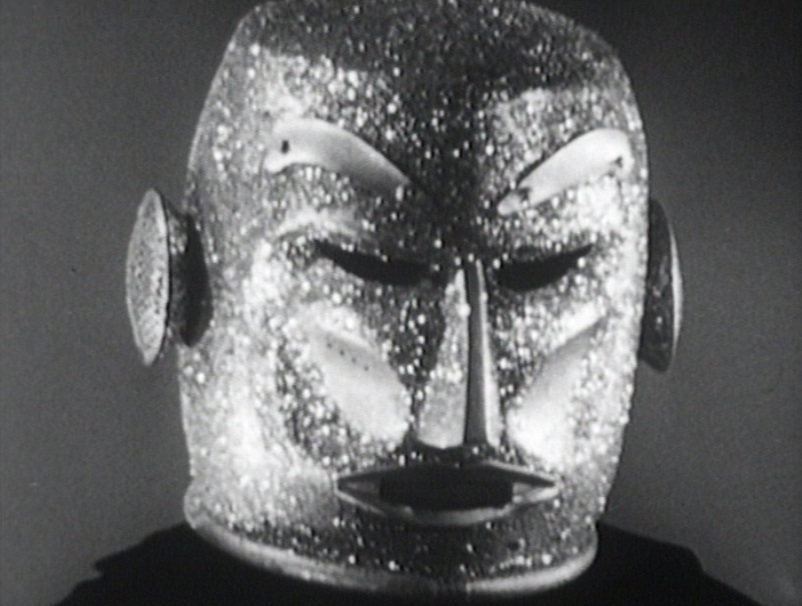 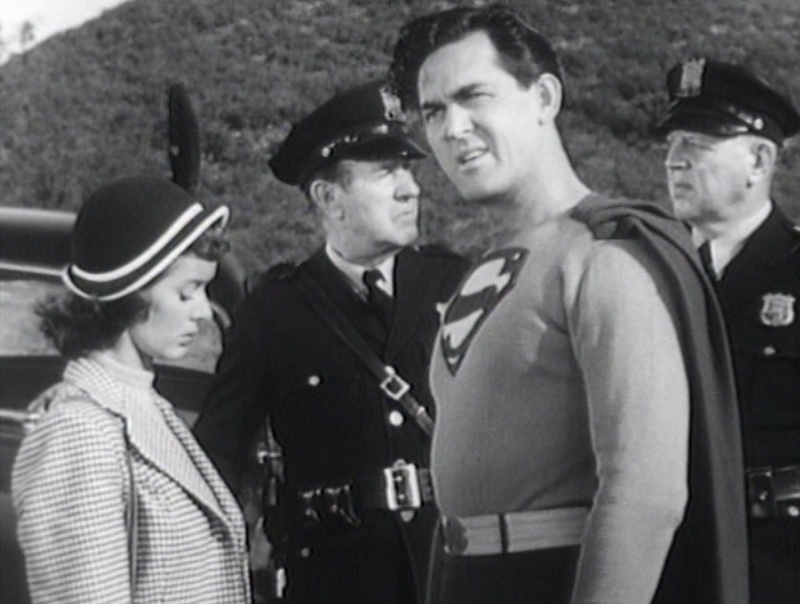 For some reason, Lex Luthor (top) turns himself into the jug-headed Atom Man (middle). Superman (bottom) can't figure it out, either.

Is that a missile between your legs or are you just happy to see me?
Other changes? Noel Neill’s Lois is less of a grump. She smiles so much, particularly when Superman is around, that my cheeks hurt just watching. Jimmy (Tommy Bond) is the same, Perry is dumber. Alyn’s Clark feels subtler this time around—he plays the nerd and the coward more often—but his Superman is a bit stiffer, his voice more stentorian. He says everything with an exlamation point! Like a comic book character!

For all its cheapness and stupidity, though, “Atom Man vs. Superman” presages many things in the Superman cinematic ouevre:

Even this headline, from when Supes fights his way back from the Empty Doom, presages things to come: 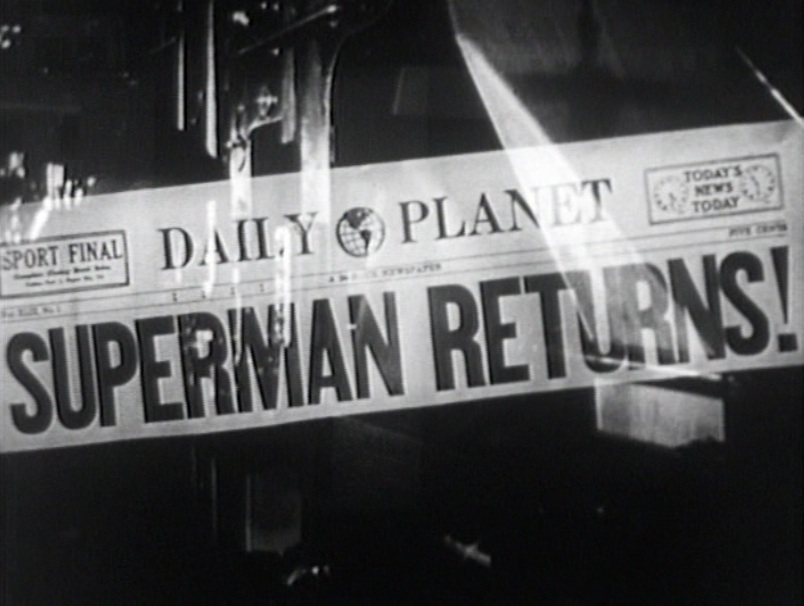 The serial also presages the ending of one of the darkest comedies ever made: Stanley Kubrick’s “Dr. Strangelove or: How I Learned to Stop Worrying and Love the Bomb.” We all know that ending even if we haven’t seen the movie: Maj. ‘King’ Kong (Slim Pickens) riding the a-bomb out of the bay-doors of the plane and into the Russian night, wa-hooing it up, Texas-style, as the world moves inexorably toward its doom.

Here, Lex Luthor shoots a nuclear missile at Metropolis. Instead of forcing it into space, a la Chris Reeve in “Superman” (or “Superman II,” or “Superman IV”), Alyn rides it out to sea, where it explodes harmlessly. Or “harmlessly.” It is a nuke, after all: 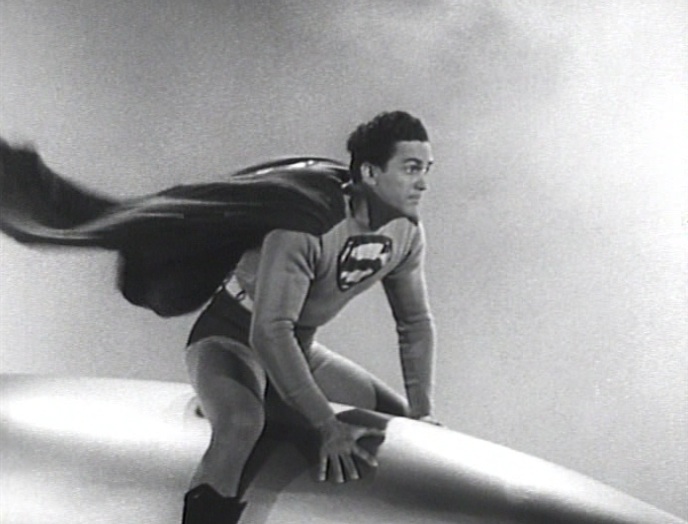 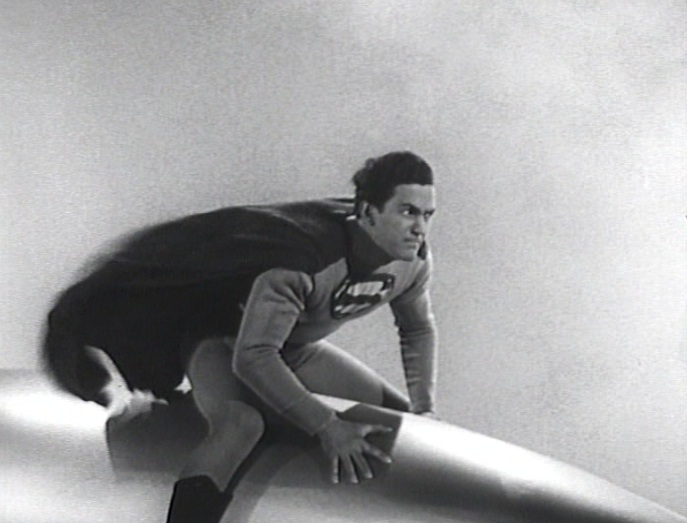 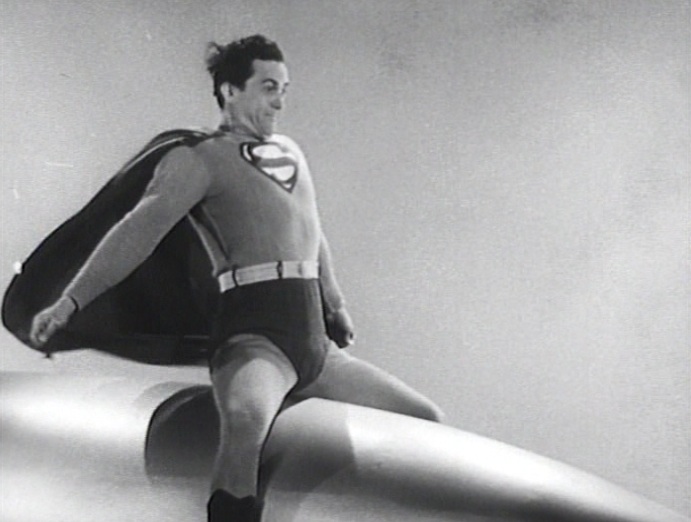 What to make of a man with a nuclear-powered missile between his legs? This looks like a job for Freud.