The first and biggest reason is Jason Momoa. He’s handsome, built like a rock (or The Rock), and he’s got a fun recklessness in his eyes. You imagine him as someone who most comes alive when doing dangerous things. 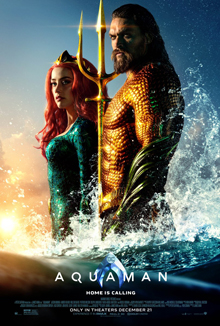 The second reason is the hero’s journey. OK, so it’s a stupid hero’s journey. Arthur Curry/Aquaman begins it a hero (single-handedly rescuing Russian sailors from a hijacked submarine), and ends it with a dull job (King of Atlantis), and the only reason he succeeds is because of weaponry. In the 1981 bomb, “The Legend of the Lone Ranger,” the title character, recovering from an attack, is shooting his pistol but keeps missing the target; so Tonto suggests using silver for his bullets since silver is pure. My father back then: “Who knew the Lone Ranger used silver bullets because he was such a lousy shot?” You can ask a similar rhetorical question here: Who knew Aquaman needed his gold trident because he couldn’t win a fair fight with his half-brother?

Overall, too, Aquaman’s heroic journey is less journey than treasure hunt. Go here, do this, which will tell you to go there and do that, which will tell you ... etc. Arthur Curry’s journey takes him from the Sahara Desert to Sicily to the middle of the Atlantic and then through a wormhole to a pristine beach at the center of the Earth. What, you thought the center of the earth was fire and lava? Nah. More like Maui.

Cue Cher
Something else that makes “Aquaman” not horrible? The villain isn’t exactly wrong. (Cf., “Black Panther,” “Avengers: Infinity War,” and “Incredibles 2.”) Yes, Orm (Patrick Wilson), the next would-be ruler of Atlantis, makes it seem surface dwellers are attacking Atlantis in order to justify a war. But his first act is to create tidal waves all over the world that wash up all the garbage we dumped in the ocean. We get our trash back. Not a bad move. The movie should’ve lingered more on this garbage. It should’ve been food for thought as we shoveled popcorn into our pieholes, then dropped the buckets onto the sticky theater floor.

To the story. In 1985, Atlanna (Nicole Kidman, CGIed well), queen of Atlantis, washes up on the rocks of a Maine lighthouse and is rescued by its lighthouse keeper, Thomas Curry (Temuera Morrison of “Once Were Warriors,” CGIed creepily), who nurses her back to health. Love and a child follow. But then soldiers of Atlantis find her, and she returns to the sea in order to keep secret her half-human kid. She's killed anyway for the transgression. The boy grows up motherless.

He also grows up to be Jason Momoa, all buff and tatted and half-fish. He can communicate with underwater creatures—demonstrated in a great scene at an aquarium when two boys try to pick on him and a giant shark almost breaks through the glass to take them on. An even better scene? He and his dad at a bar, and four or five toughs gather around asking if he’s “Aqua boy.” He stands and confronts them: “Aquaman,” he corrects. An ass-whupping seems imminent. Instead, the lead tough asks, “Can we get a selfie?” Then we see a series of selfies from the evening as men and Aquaman get deeper and deeper into their cups.

After that, the tidal wave, and the appearance of Princess Mera (Amber Heard), who wants AM to return Atlantis to reclaim his birthright and end the war. Doesn’t go as planned. He’s seen as an interloper, a bastard, and a mongrel. Orm challenges him to a duel, defeats him, and only doesn’t kill him because Mera springs into action and the two escape and begin their treasure hunt to get the original trident of Atlantis. So Aquaman can win the fight.

A few questions at this point:

Another question: Shouldn’t they get weaker away from water? Like when walking in the desert? That’s part of the heroic journey but neither Aquaman nor Mera seem to suffer at all.

Just before the war with the crustaceans
In the center of the earth, Aquaman is reunited with Moms, who, sure, was destined for execution; but she survived. AM then gets the trident, and they all return for a giant battle Orm has started with ... no, not us. Not yet. It’s with the crustaceans. Yeah, doesn’t make sense in the movie, either. In the midst, Aquaman and Orm fight again, this time Aquaman wins (natch), but he shows mercy and spares Orm’s life (natch). And Arthur Curry is crowned the new King of Atlantis.

Wait, since Atlanna is alive, shouldn’t she be the ruler? Or is Atlantis a patriarchy on top of all its other problems?

“Aquaman,” directed by James Wan (“Saw,” “The Conjuring”), is monumentally stupid, but it has something. I guess it’s personality, which, as Jules said, goes a long way. The one thing the DC universe has done well—really the only thing it’s done well—is casting: Cavill as Superman, Gadot as Wonder Woman, Momoa here. Now if they can just work on literally everything else.