You can just imagine the studio pitch: “Bourne Identity” meets “Pineapple Express.” Small-town stoner is in reality, and unbeknownst even to himself, a top CIA assassin.

The surprise is how sweet “American Ultra” can be. The tenderness in some of the early scenes took me by surprise. But then gore and general cartoonishness took over. 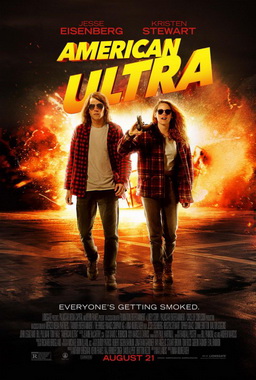 Mike Lowell (Jesse Eisenberg) lives in the dying town of Liman, West Virginia (an homage to “Bourne” director Doug Liman), where he gets high, eats Fruity Pebbles, and sits on the hood of his car with his girl, Phoebe (Kristen Stewart), and tells her the further adventures of his creation “Apollo Ape,” which he can’t bother to write down. He works at the local Cash & Carry, a dying all-night grocery store, and looks for the perfect moment to propose to Phoebe. He also can’t leave Liman. Physically. He gets anxiety attacks and throws up.

Turns out this is part of his programming. Mike is the last remnant of a CIA program that turned three-time offenders into assassins, but which is now part of an internecine struggle between its creator, Victoria (Connie Britton), and middle-management douchebag Adrian Yates (Topher Grace), who has his own program, codenamed “Tough Guy,” that turns psychopaths into assassins.

After Yates seeks to eliminate Mike, Victoria activates him, but some of Mike’s mental wiring is frayed. When threatened, his pupils dilate and his inner assassin takes over; then he reverts back to the vulnerable slacker. He kills two people with a spoon, for example, then needs a hug from Phoebe. “I have a lot of anxiety about this,” he says, surveying the damage.

Eisenberg makes the most of this dichotomy, and his rapport with Stewart, his co-star from 2009’s “Adventureland,” is touching.

But there are missed opportunities and unanswered questions. How much of the stoner Mike is the real, pre-CIA Mike? A mid-movie reveal dampened rather than deepened my interest, while the CIA here is over-the-top, calling in drone strikes on American shopping markets.

It’s Eisenberg who anchors things. The stoner who is really an assassin is the movie’s least cartoonish element.

-- Originally appeared, in slightly different form, in The Seattle Times