In May 1997, I gave “American Pastoral” by Philip Roth a mixed review for The Seattle Times and it went on to win the Pulitzer Prize for fiction. Oops? Nah. I still think I got it right. I think the Pulitzer and National Book Award committees do what the Academy does with the Fondas and Pacinos and Scorsese of the world: Here’s your award for the lesser thing because we forgot to give it to you for the greater thing. The greater thing for Roth was “Goodbye, Columbus,” “Portnoy,” and the Zuckerman trilogy, particularly “The Ghost Writer.”

The complaint I had about “Pastoral” is the complaint I would have about subsequent award-winning Roth novels, including “I Married a Communist,” “The Human Stain,” “The Plot Against America.” The subjects were fascinating: mid-century American puritanism/fascism. I just thought Roth’s writing talent had diminished. He replaced dialogue with diatribe. He got boring. Roth of all writers. 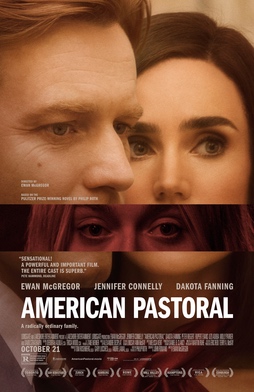 But shouldn’t that bode well for the movie version? The subject is still in place, after all, and the filmmakers—writer John Romano (“The Lincoln Lawyer”) and first-time feature director Ewan McGregor—can replace the diatribe with dialogue. In a way, they have to. It’s a movie.

But they blew it with the casting—particularly McGregor casting himself as Seymour “Swede” Levov. The towering, broad-shouldered, Jewish-American athlete of 1940's Weequahic High in Newark, New Jersey, was suddenly replaced with a tiny Scot.

Patrimony
The story is pretty much the same. It’s the tension of generations and decades. It’s the story of the political  pendulum and how we keep swinging it, or on it, or getting cut by it.

The leftist corrections of the 1930s led to the McCarthyism of the early ’50s, which led to left-wing radicalism of the late ’60s and early '70s, which led to Reagan—who began to dismantle the leftist corrections of the 1930s. That’s my summation. Here, the ’50s is less Red Scare than idyll. It’s the American Eden from which we find ourselves banished. By both time and inclination, apparently.

In my review for The Times, I wrote:

The Swede seeks the American dream but gives birth to the American nightmare: a stuttering daughter who, in the counterculture ’60s, blows up their small-town postal station as a protest against the Vietnam War. It’s as if Mel Brooks sired Robert Redford, who sires Squeaky Fromme.

In both novel and movie, the father, Lew (Pete Riegert), is loud, opinionated, very Jewish, and interesting; half the time I wanted to follow him around. The son is blond and bland, beautiful and dutiful. The daughter, Merry (Dakota Fanning) starts out ultra-sensitive, becomes desensitized through politics, then, after all the trauma and tragedy, returns to the ultra-sensitivity of Jainism. She goes from crying about the self-immolation of a Buddhist monk half a world away, to killing her neighbors, to not wanting to harm microbes. So how did that second step occur? That’s the question the movie skirts. It just happens. She’s young and full of rage and easily indoctrinated into radical Weather Underground-style politics.

Letting go
Turns out all the women around the Swede are all horrible human beings. His daughter commits acts of terrorism. His beauty-queen wife, Dawn (Jennifer Connelly), retreats into facelifts and blankness and affairs with lesser men. His daughter’s radical colleague, Rita Cohen (Valorie Curry, quite good), connives and taunts and spreads her legs for Swede. Meanwhile, his daughter’s shrink (Molly Parker—always playing someone you want to punch in the face) not only gives horrible advice but hides Merry and directs her to the underground ... where she is repeatedly raped and abused.

The only decent woman in the entire movie is Swede’s assistant at the Newark glove-making plant, Vicky (Uzo Aduba, “Crazy Eyes” from “Orange is the New Black”), who sticks by him through it all. But even she has that odd moment when they’re handing out coffee and nosh to National Guardsmen during the Newark riots and she lectures the teeniest soldier on his responsibilities. She replaces dialogue with diatribe.

The Swede’s story is bookended by the 45th class reunion of Weequahic High—where Roth’s alter ego, Nathan Zuckerman (David Strathairn), learns what happened to the idol of his youth—and the Swede’s funeral a day later. As Zuckerman is giving his thoughts via voiceover, a taxi pulls up, a blonde-haired woman gets out, and, as the camera follows her from behind, she slowly makes her way to the casket. Everyone stares. Is it or isn’t it?

Doesn’t matter. It doesn't resonate either way. If it's Merry, what does that mean? That she forgives her father? For what? That she forgives herself? Why? That she’s come to dance on his grave? One final act of self-renunciation? Who is she? In the end, a pawn in the game. Less the radical left’s than Roth’s.