The central joke in “A Million Ways to Die in the West” is how the main character, Albert (writer-director Seth MacFarlane), is really a 21st-century man stuck in the American West of the 1800s. It’s not a time travel movie. Albert just reacts to everything around him as if he were, you know, Seth MacFarlane, born in 1973, raised in relative safety and security, allowed to get soft on TV and pop culture. He can’t shoot a gun, doesn’t have much courage, mopes around a lot. He doesn’t hate where he is so much as when he is.

His vernacular is 21st century but his surroundings are 19th. A big block of ice crushes a man transporting it. “Oh, that went South so fast!” he shouts. When he gets a song stuck in his head (the inspired “Moutache Song”), his friend, Anna (Charlize Theron), tells him to think of another. “How?” he says. “There’s only like three songs. And they’re all by Stephen Foster.”

At one point he says, “I’m not the hero. I’m the guy in the crowd making fun of the hero’s shirt.” Which is true. Basically he’s the moviegoer or the TV watcher. He’s us, suddenly stuck in the movie. 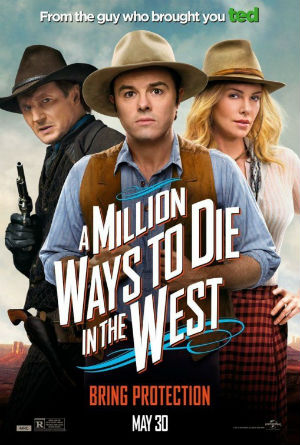 Why doesn’t it quite work?

I laughed out loud a lot, sure, but then we’d get some scatalogical bit that would just make me wince. Or the plot would pick up unnecessarily and transport us to the obvious place.

The story has a classic, dull structure:

The movie, in other words, still buys into the wish-fulfillment fantasy, and blah for that. Did Woody Allen, in his early films, have his character, his schlemiel, become “brave”? Did Woody’s movies begin as parodies of the genre only to buy into the tropes of the genre? When is Hollywood going to stop doing this? You’d think MacFarlane at least would know better.

At the same time, I still thought the movie would be popular. The trailer was funny, MacFarlane (“Family Guy”) has his rabid following, his first feature, “Ted,” grossed $218 million two years earlier. Instead, “West” was one of the summer’s biggest box-office bombs: More than 3,000 theaters, a Memorial Day weekend release, but only $42 million total.