At the Seattle Jewish Film Festival screening of the documentary “Jews and Baseball: An American Love Story,” the only character onscreen who was razzed by the mostly Jewish audience was not Adolf Hitler, who made his usual appearance as counterpoint to Hank Greenberg slugging 58 homeruns in the summer of ’38 (“every one a homerun against Hitler”), but current baseball commissioner Bud Selig, who bought majority ownership of the Seattle Pilots in 1969 and promptly moved the team to Milwaukee, where they became the Brewers. As Selig, a talking head in the doc, proudly discussed the move, the hissing began, slowly at first, then winding its way through the auditorium as other, less-baseball-savvy viewers picked up on what was actually being said.

Way to go, Bud. Not many Jews can get razzed more than Hitler by Jews.

“Jews and Baseball” is a welcome doc, a fun doc, but it arrives with two strikes against it. The first is Aviva Kepner’s superlative documentary “The Life and Times of Hank Greenberg” (2000), which covers a lot of the same ground: baseball as avenue to Jewish assimilation; the name changes and anti-Semitic slurs and leatherlungs; the debate over whether or not to play on Rosh Hashanah and Yom Kippur; the pride that “one of our own,” etc., etc., tall and broad-shouldered and good-looking, etc. etc. If you know “Greenberg” like I know “Greenberg,” a lot of “Jews and Baseball” will be familiar. 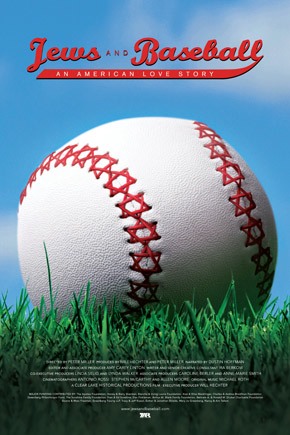 Where it differs, of course, is taking in the whole 150 years of baseball history. So we get not only Hankus Pankus but Barney Pelty, the Yiddish Curver (1903-12), and Moses Solomon, the Rabbi of Swat, John McGraw’s Jewish answer to Babe Ruth, who hit 47 homeruns in the Southwest league in 1923, played two games for McGraw, got into a salary dispute, and left for football. Zay gezunt. We get Al Rosen, who had a helluva year in ’53, then went through salary disputes with, of all people, Indians’ GM Hank Greenberg. We get Ron Blomberg, baseball’s first DH, and Shawn Green, signing autographs for the kids, and snippets of Denis Leary’s great, anti-Mel Gibson rant as Kevin Youkilis played a superlative first base. And, of course, we get Sandy Koufax, the Left Arm of God, who broke decades of silence to become a talking head in this doc.

But this 150 years is actually the second strike against it. How do you create a cohesive story, an arc, from that 150 years? Written by Ira Berkow and directed by Peter Miller, “J & B” inevitably goes for the chronological approach, which isn’t bad; but as we chomp our way through the years, we take two huge bites (Greenberg and Koufax), some mid-sized bites (Rosen), and then a lot of what the candy-makers call “fun-sized” bites. They’re not that much fun. I would’ve liked to know more about Pelty, for example, or all those Cohens who changed their names in the '10s, and what they went through. I suppose I’m asking for that which doesn’t exist, or which might not be that interesting.

A counterpoint to my critique is provided by Elliott Maddox, who played everywhere in the 1970s, and who first shows up giving shit to Blomberg for ruining baseball with his DHness. Ronnie, we know, is Jewish. But Maddox? Turns out he converted and his Christian mother is glad he did. She’s happy he believes in something. As if to prove his Jewishness, he also has one of the funnier lines in the doc. He talks about being a good two-strike hitter because he lived his entire life with two strikes against him: He was black and Jewish.

So two strikes against it but the doc is a good two-strike hitter. I’d call it a clean single or a looping double. (“Greenberg” is a homerun.)

The Al Rosen section is good if incomplete. Too much of his shortened career is blamed on Greenberg.

I liked learning that, Adam Sandler aside, and despite a Jewish wife and two bat-mitzvahed daughters, Rod Carew never converted.

Both Moe Berg and Marvin Miller probably deserve their own docs.

It’s the Koufax section that recommends the movie, but not necessarily because of him. He’s fine as a talking head. He’s aged incredibly well. (Although I’m curious how his arm is after all these years, since that was the reason for his shortened career: the fear of losing that arm.) But the greater insight comes from his catcher, Norm Sherry, who talks about that moment in a 1961 spring training game when he told the usually wild Koufax that he should forget about speed and just throw the ball over the plate ... and Koufax promptly struck out the side with pitches that, Sherry was quick to inform him, were faster than when he was trying to throw hard.

Ron Howard, of all people, adds insight to this section. He was a national figure himself in the early 1960s, as Opie on “The Andy Griffith Show,” and, living in L.A., Koufax became his favorite player. He talks about the poetry of Vin Scully’s perfect-game call: how Scully kept mentioning date and time as a way of letting late-arriving listeners know that something historic was happening without jinxing the proceedings by bringing up the dreaded words “no hitter” and “perfect game.” More, when Koufax and Drysdale unprecedentedly held out together in the spring of ’66, and there was bad press because of it, and little Ronnie Howard was inevitably disappointed because of it, he still got out pencil and paper, did the math, and realized that he, working on “The Andy Griffith Show,” was actually making more money than the great Sandy Koufax. He knew that wasn’t right.

Is it odd that the best talking heads in the doc tend to be gentile? Where are the guys like Don Shapiro and Bert Gordon, two Tigers fans, who helped make the “Greenberg” doc such a joy? Where is Jane Leavy, who wrote the great book on the great Koufax? Where is Rod Carew?

I do think baseball fans should see “Jews and Baseball” if they get a chance. There’s enough here for them. For everyone else, I offer a noncommittal Jewish shrug.