When I saw it at a recent Saturday matinee at SIFF Uptown, “63 Up” seemed the age range of the audience as well. I felt like the kid in the crowd. Too bad. Real kids could learn so much from this.

It felt a bit like attending a class reunion; I kept getting reacquainted. “Oh right, Tony, the wannabe jockey who becomes a cabby, who’s got a joie de vivre and is always on the run, always on the make. And Nick, the farmboy who doesn’t “want to answer those kinds of questions” (about girls), who becomes a scientist and moves to the states and marries one beautiful woman, then divorces, then he marries another beautiful woman. I guess it pays to not answer those kinds of questions. And of course Neil, unforgettable Neil, who at 7 was a cute Liverpudlian boy with Beatle bangs who skipped along sidewalks and wanted to be an astronaut, and who at 28 was homeless in the Scottish countryside, unable to answer questions without rocking back and forth, in the midst of a psychological breakdown.”

I could never forget him. Not in a million years.

Give me a child until he is 7
For those who don’t know: the “Up” series began in 1964 when, per director Michael Apted’s voiceover, “Granada television brought together a group of 7-year-olds.” Since then, Apted has revisited them every seven years. 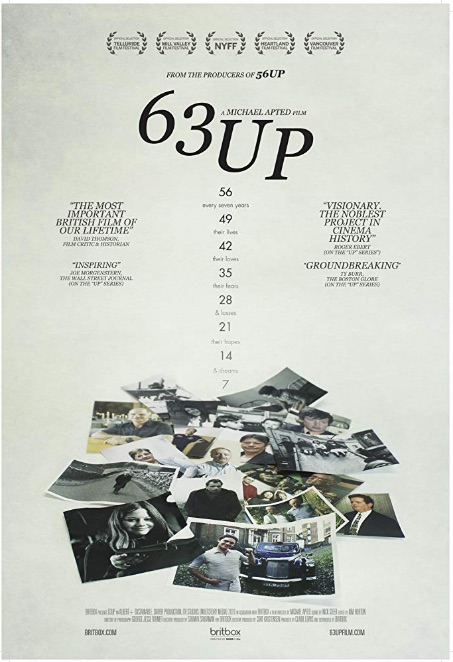 I think the first time the series was bundled into a movie was in the 1980s for “28 Up,” which played at the University of Minnesota Film Society where I volunteered on Thursdays. I saw it numerous times. It was riveting and devastating.

One way it was devastating—somewhat obscured now at 63—was the way adolescence fucks us up. The kids at 7 were mostly boisterous and outgoing and at 14 the opposite. They looked to the side, mumbled out of their mouths, covered their mouths. They were painfully embarrassed about everything. Even at 21 and 28, it felt like they were still recovering from the shock of whatever adolescence does to us.

Now, at 63, it feels like a slow, downhill coast. We’re getting  parents dying and grandchildren being born and retirement on the horizon. Weight needs to be lost, nose hairs need to be trimmed, but much less angst. It’s less about what will happen than what has.

Nick has cancer. He was always absurdly fit for a scientist, and here, when we first see him from behind, it’s a bit of a shock. So thin. So bent over. In the chair, it’s better. He lights up talking about the great “moment of pure joy” in his life when his son was born.  Neil is still alive, and, thanks to an inheritance, owns property in France. He’s involved in church, too. As a reader? His Liverpudlian friend, Peter, who dropped out after “28 Up,” and didn’t return until “56 Up” when he wanted publicity for his band, returns again, with trepidation. In many ways, he sounds the most like I think I might sound—worried over the thing he said two minutes ago. We also hear him singing. His voice is lovely.

I kept asking questions in the dark. Has anyone come out of the closet? It began in ’64/’70, when such things were rarely admitted, but no, not here. Are all the participants still alive? That was just a by-the-way thought. We’re about an hour in when we keep getting shots of Lynn, the librarian, whose funds are forever being cut, and who still keeps striving to educate children. There she is at 21, then 7, 35, 56 and we’re waiting and waiting. And then it hits us: No, she died six years ago. Her husband and two daughters are interviewed to keep up the story. The library where she worked dedicates a wing in her name.

She’s not the only missing one. Of the original 14, we also don’t have Suzy, who decided against doing it this time around, and Charles Furneaux, one of the three prep-school boys, who, from 7 to 21, tended to wind up where they hoped to wind up. I.e., they talked about wanting to get into X, Y and Z, and at 21 Apted intoned that they got into X, Y and Z. It was as if they had a gilded path. The dreams of others fell apart but theirs held. Two of them, Furneaux and John Brisby dropped out after “21 Up.” They felt it was all a bit unfair—as if effort wasn’t involved on their part—but Brisby was coaxed back, and good for him. Last go-round, he pointed out that his gilded path included his father dying when he was 9 and attending Oxford on a scholarship. So there. Furneaux, lean and long-haired at 21, never returned, even though he became a TV documentary producer. The third of the three, Andrew Brackfield, has always stuck it out.

Is there truth in the series’ critique of the class system? Yes, with Brisby’s provisos. The working-class kids tended to stay working-class work. Tony, who wanted to be a jockey, became a cabbie but has a nice life—even if, now, he’s fending off Uber and the like. The working-class girls became admins and librarians. The children’s home boys became a bricklayer and a forklift operator. Meanwhile, the prep-school boys became: 1) barrister, 2) solicitor, and 3) TV producer.

A quote attributed to Ignatius Loyola begins the series: “Give me a child until he is 7 and I will show you the man.” So is there truth in that? A bit, with provisos about the shattering nature of adolescence. Put it this way: It feels true enough for Jackie (mouthy as a child, never not), and Tony (forever running, forever himself), and Paul (gentle as a child and as a grandfather in Australia). It feels less true for Bruce, who, as a teen, had cheekbones you could cut glass on, and Andrew, the middle prep-school boy, and Lynn.

And of course it’s not true at all for Neil.

I will show you the man
We don’t get enough politics, to be honest, given everything that’s gone on in the world in the last seven years. Brexit is mentioned a few times but Trump only once—to Nick, our American. Did no one else have an opinion on this asshole?

I’d also like more on the effect the series had on them. Most anticipate another segment with trepidation but we never get the why of it. Is it the questions? Justifying what you’ve done against what you wished to do? Being seen as a symbol? Were there positives? Did it grease any paths? Help them get laid? Tony talks about having Buzz Aldrin in his cab when a passerby asks for an autograph. When he passes the paper back to Buzz the passerby corrects him: “No, I want your autograph.” That’s a great vignette but I’m curious about it writ large. I’m interested in this: Did talking about their life paths on TV alter those life paths in any way?

If you’re the least bit empathetic, you certainly wonder how you would look or sound in the series, and how your words through the years would echo back to you. Erik at 14: “I would like to be a writer.” Voiceover for “21 Up”: Erik was now doing menial work at a bank, having dropped out of university. Erik at 42: “Yeah, at this point, I don’t see myself ever getting married.” Voiceover for “56 Up”: “The wedding took place at a small civil ceremony in the Georgetown neighborhood in Seattle.”

“63 Up” flags at times. Tony is the first segment and maybe the longest, and at some point I went, “Wait, there’s how many more of these?” But then suddenly it's over. As Tony says about life, it all goes so fast.