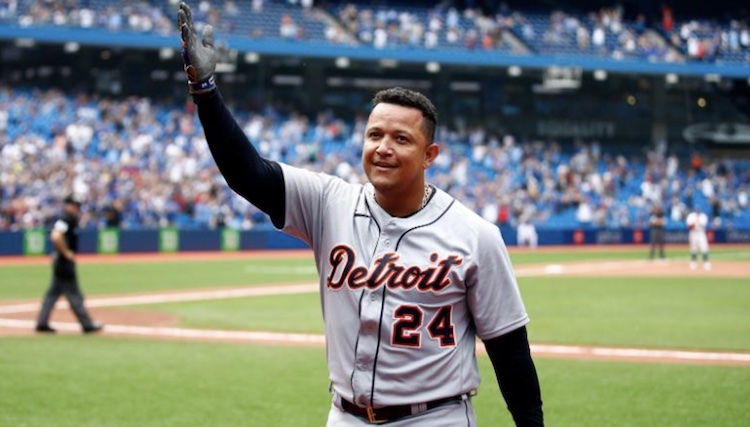 Miguel Cabrera went yard today for his 13th homer of the season and the 500th of his career, and to me you just have to celebrate. He's such a joyous figure. Even the Toronto home crowd gave him a standing ovation today. Plus it's been a slog getting there.

He did it old-school, without any 50-HR seasons, the way Hank Aaron, Frank Robinson, Harmon Killebrew and Mike Schmidt did it before him. His career high was 44, which he hit twice. He's the 28th guy to join the club, and the first since David Ortiz in 2015. We only had two in the 2010s after a record nine in the 2000s. It's a rare event again, which is nice. Not even sure who's next in line. Nellie Cruz, another joyous figure, has 443 but he's 40—although he still has pop: 27 so far this season. Giancarlo at 332 has a shot if he stays healthy. Mike Trout at 310, same.

My favorite Miggy homer isn't even on this list, of course, since it happened in the World Series. Worth a watch again. As is No. 500. They're kind of similar, aren't they? Opposite-field jobs, one as a 20-year-old rookie who had just been brushed back by Roger Clemens, the other as the grand old man of baseball everyone was cheering for. That's how quickly it goes. Touch 'em all, Miggy.