I never thought I'd see another Triple Crown winner in Major League Baseball. I thought we were done with that. There'd been one in 1966 when I was 3 (Frank Robinson), one in 1967 when I was 4 (Carl Yastrzemski), and ... nobody since. Nothing for nearly half a century. Baseball had become too specialized, it was argued. Nobody can lead the league in homeruns and RBIs and batting average anymore because they require different talents. In the modern era, there had ony been 13 TC winners anyway, and some of the best hitters in baseball history had never done it: Babe Ruth, Joe DiMaggio, Stan Musial, Willie Mays, Hank Aaron, Frank Thomas, Barry Bonds.

Now someone else has done it: Miguel Cabrera of the Tigers, Miggy, who did it this year, hitting .330, slugging 44 homeruns, and driving in 139 runs. Makes me want to pump a fist. And I'm not even a Tigers fan. 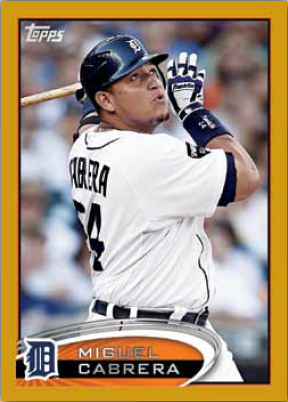 It's come as a surprise, though, an annoying surprise and shock, that the baseball bloggers I read tend to think he shouldn't be the league's MVP.

Yeah, I know. And I know you know. Wins About Replacement. But WAR isn't like almost every other baseball stat. There's no standardized definition for it. It tries to combine everything in a way that seems fair, and different orgs have different arguments for how to value this over that, or that over this. Baseball Reference's WAR rating seems to be the popular choice, as ESPN.com is using it.

In WAR, defense is included. Trout shines there. He's a fantastic defensive center fielder. Cabrera is a serviceable third baseman. But even offensively, Trout's WAR rating is 8.6 (No. 1) to Miggy's 7.5 (No. 2). So again: Trout.

To be honest, I've never felt like more of an old fogey in a conversation about baseball stats. I'm a Bill James guy, but to me this isn't even a question. The Triple Crown is hallowed.  I know guys who've managed the TC haven't always won the MVP--Chuck Klein in '33, Lou Gehrig in '34, Ted Williams twice in the 1940s (sportswriters hated him)--but every dude since has: Mantle, Robby, Yaz. And then it became impossible to do. And now somebody's done it. And these guys are talking WAR.

As for the defense argument I'll add this: Yes, Trout's amazing in the field and fun to watch. But Miggy's been playing out of positon all year. He's normally a first baseman. When the Tigers had the chance to grab Prince Fielder, however, who could only play first, he moved over to third. For the good of the team. The Tigers would not be in the post-season right now if they hadn't grabbed Fielder; and they wouldn't have grabbed Fielder if Miggy hadn't moved.

So he's not only the best hitter in baseball, he's a team player. That has some value.

Plus, and not for the last time, he won the frickin' triple crown already. Yeesh.