It's already interesting. We learn that Xi's father, Xi Zhongxun, was a high-ranking CCP official who was purged in the early 1960s, then reeducated in the provinces during the Cultural Revolution. 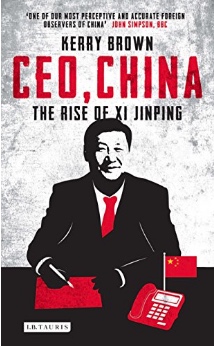 As a teenager, Xi was sent to the Shaanxi countryside in central China. After Mao's death, and after the opening up under Deng Xiaoping, he spent time in the U.S., visiting Muscatine, Iowa of all places. (Has anyone written about this? Yes. And yes.)

Brown mentions the one time he met Xi, in 2007, which he sees as indicative of some of the ways Chinese power works:

I did have one chance to observe Xi close up when he was in Shanghai as Party secretary there. He had only been in his position for a few weeks when I arrived with my delegation of political and business leaders from Liverpool, visiting the city to re-energize the relationship. The usual lobbying had secured a meeting with the then mayor, a man called Han Zheng. But most people were aware that the real power lay in the hands of the Party boss, and that securing a meeting with him was unlikely. ... To almost everyone's surprise, however, the news came back during the first day of our visit that Mr Xi did want to see us. ...

Xi did not put a foot wrong. The meeting ended punctually, and we were whisked away, us to our fate, he to his. A few days after this meeting, we crowed about it to British journalists based in Shanghai, and they laughed. They had recently heard a story by another group who had had a similar experience – they had arrived in Shanghai on a low-profile business delegation, expected to only meet a deputy mayor, or, at best, the mayor himself, and then found themselves taken to meet Mr Xi. ‘The speculation is that Xi needs to do the least risky, most fail-safe things at the moment,’ one of the journalists said. ‘Any edgy delegations or people who might challenge him at all, and he keeps away from them. But the minor stuff that carries no risk is fine. The last thing he wants to do is blot his copybook so close to getting final promotion.’ Unflattering as it may have been, it sounded as good an explanation as any for our being gifted with this high-level attention. It also says something quite profound about how to get to the top in modern China.

Xi was in Shanghai for eight months. Brown says there were three striking things he did there that might help us understand him further. One of the three doesn't seem much to me: he admired the competence of Ding Xuexiang, a private secretary, and helped elevate him. Nice. Great. The other two strike a chord in the geopolitical world of 2018:

Who is this in sharp contrast to? Yeah.