I heard the following exchange on NPR this morning following the death of Gov. Mario Cuomo last night. It's from a 2004 interview conducted by Steve Inskeep regarding Cuomo's book, “Why Lincoln Matters: Today More than Ever.” It's a nice, smart exchange in a grubby, stupid time.

President Lincoln never professed to belong to an organized church of any kind.
That’s absolutely accurate. If he was anything, he was a rationalist.

And even though he was not part of an organized religion, Lincoln did invoke God in his speeches, and used the language of the Bible in his speeches.
He used the language of the Bible over and over in his second inaugural—how religious his references are. That’s absolutely true. But he never talks about Jesus as the son of God. And he doesn’t talk about “God”; he talks about “Creator.” He waas clearly not a person who accepted any specific religious faith.

In the second inaugural, there’s the line about, “As God gives us to see the right.” I mean, there are references to God.
Yes, well, but he never makes an argument for God.

I just wonder if it says something about the electorate that politicians were addressing then and now? Something practical.
Well, let me ask a really grubby, political question—[chuckles] I’m better at this than you are, of course, because I lived that life for a long time: Would a politician stoop so low as to use religion to get close to voters?

[Laughter]
Yeah. I hope I didn’t do it too much, because when I drop dead and I find out there is a God, and, indeed, He has a big book with everything noted. Of course, politicians do it. Did Lincoln do it for that reason? All I know is Lincoln was a master politician.

Gov. Cuomo, what do you think Lincoln would make of the presidential campaign we’re in right now?
He would say, “Thank God I didn’t have to raise that much money.”

The full exchange is here.

Sam Roberts has a good obit and appreciation in The New York Times. The New Yorker goes all out, with posts from Elizabeth Kolbert and Ken Auletta. Kolbert talks about Cuomo's dark broodiness, his moral gravity, and the irony of his time in office, in which the great construction project was prisons. “His great gift,” she writes, “was to make listeners feel that politics was a serious business and that civic life matters.”

I was proud that Mario Cuomo was my governor (back when I lived in New York) and wish him well on the backstage pass portion of his journey. As a photographer for the Suffolk County Democrats, I took his picture, and he gave me his autograph. He was a nice guy, a great leader, a decent human being, the son of immigrants who played minor league baseball here in Georgia one summer. Goodbye, Mr. Cuomo.

Mario Cuomo was one of the kindest and most dedicated politicians I ever knew, right up there with Teddy Kennedy and Paul Wellstone in my pantheon of the greats. Cuomo lived his values, and those values were almost always in the direction of social justice. I’ll never understand why he decided against running for president. He could have been elected—no one could give a speech as well—and he would have made a terrific leader for the nation.

I missed most of Cuomo's highlights, including the 1984 DNC speech that rocked the Dems and made Cuomo a frontrunner for the Democratic nomination, and possibly the presidency, if he so desired. Apparently he didn't so desire. At least not enough. He might've been the Robin Wright of politicians in this regard. I mostly know him from Ken Burns' 1994 “Baseball” documentary, in which we learn, among other things, that Cuomo had signed a minor league contract with the Pittsburgh Pirates for a bigger bonus than Mickey Mantle received from the New York Yankees.

A thoughtful man in thoughtless times. If there's anything to know, now he knows. Rest in peace. 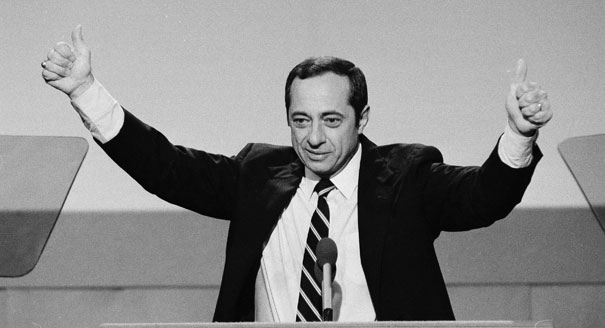 A thoughtful man in thoughtless times.