Making the Dish, and a Portrait of the Artist as a Stand-Up Comedian

Andrew Sullivan's blog, The Dish, linked to mine today, which is very, very cool, particularly considering how often I've read him and quoted him. I figure I still owe him about 499 posts to make up the difference. I'll get cracking.

Sullivan was interested in a post of mine from last week comparing American comedian Louis C.K. with French author Marcel Proust, both of whom, 100 years apart, talked about how technology that was once considered amazing (the phone and smartphone), each became, very quickly, a subject for complaint. For this, Proust called us “spoilt children.” Louis C.K. is a bit more florid, calling us “the shittiest generation of piece-of-shit assholes that ever fucking lived.” Proustian.

I came across the Proust quote in Alain de Botton's book, “How Proust Can Change Your Life,” which is particularly good in the early chapters, particularly Chapter 3, “How to Take Your Time.” That, of course, is another piece of advice from Louis C.K.: “Give it a second,” etc.

I'm not surprised, by the way, that there's this connection between the early 20th-century French author and the early 21st-century American stand-up comedian. In de Botton's book, Proust is quoted as saying that artists are...

...creatures who talk of precisely the things one shouldn't mention.

And that's what the best stand-up comedians are, too. They stand before us and tell us uncomfortable truths to make us laugh. If it's done poorly and without empathy, you get Daniel Tosh earlier this week or Michael Richards a few years back. If it's done well, you get Louis C.K., Ricky Gervais, Chris Rock, Eddie Murphy and Richard Pryor. 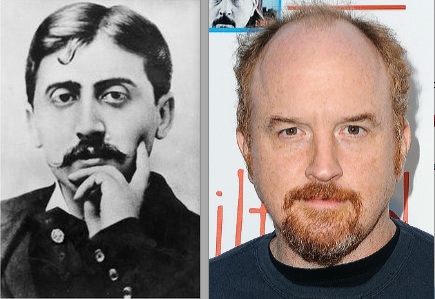