LeBron James' post-game comments about NBA fans who rooted against him and the Miami Heat in the NBA Finals startled me. Not because the words came from a position of wealth and privilege, not to mention a bit of spite, which they do, but because they echoed something I wrote 16 years ago. 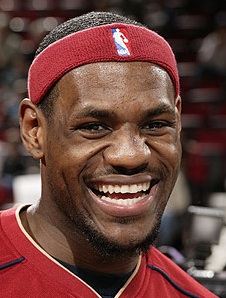 They have to wake up tomorrow and have the same life that they had before they woke up today. They have the same personal problems they had today ... They can get a few days or a few months or whatever the case may be on being happy about not only myself, but the Miami Heat not accomplishing their goal, but they have to get back to the real world at some point.

And here's what I wrote in an Op-Ed for The Seattle Post-Intelligencer after being at the game in May 1995 when Ken Griffey Jr. shattered his wrist making a spectacular catch in right-center field. I was trying to talk myself out of the depression I waas feeling:

I returned to baseball four years ago with what I thought was an adult attitude about the game. No matter if my team won or lost I kept things in perspective. Randy Johnson strikes out fifteen guys, I'm still working the same job. Edgar Martinez injures his ankle, I've still got the same problems, the same goals, the same friends, the same enemies. Nothing about my life has changed except this or that vicarious victory or defeat.

My comments elicitated a few jokes from friends. James' comments elicitated a firestorm. Jason Reid of The Washington Post wrote that “James put his foot in his mouth again ... essentially saying his approach wouldn’t change and all the people who rooted against him were stuck with their depressing little lives.” Abram Lufrano of Bleacher Reporter wrotes that James was essentially saying the following: “I am LeBron James and I have a better life than all of you losers.” James even had to walk back his comments. He had to say he wasn't talking from a position of superiority.

But he wsan't wrong. He was digging past the cliches to articulate a central truth in modern sports. In the end, I thought it rather brave of him to bring it up at all.