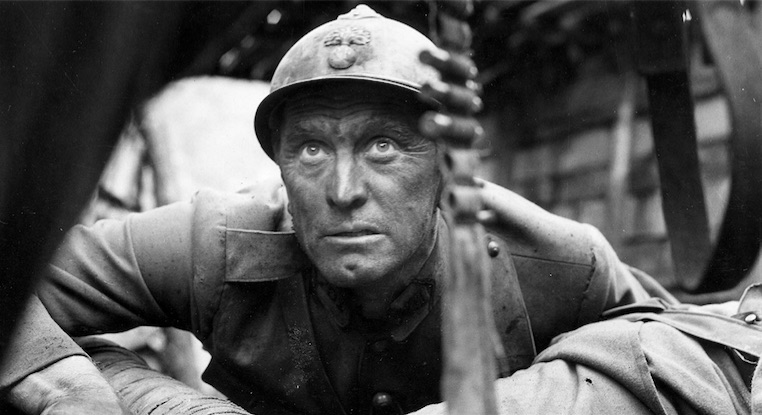 As Col. Dax in Stanley Kubrick's “Paths of Glory.” Douglas made the most of his movie stardom.

I first saw him as an impression, Frank Gorshin or David Frye on some late ‘60s or ’70s variety show, all seething talk through clenched teeth in a sometimes-cracked voice, with maybe an index finger creating a hole in the chin. He was always one of the regular imitations, along with Bogart, Cagney, Nixon. I still think of Joe Flaherty's line, “Must be some kind of FREAK,” in an SCTV episode of “What's My Shoe Size?,” and laugh.

So when did I first see him on the big screen? Much later. Probably “The Man from Snowy River” when I ushered at the Boulevard I and II in south Minneapolis. That became one of my mom's favorite movies. No, wait! “20,000 Leagues Under the Sea”! Of course. As a kid. He wore a striped shirt. Like us.

Most of his movies, though, came to me as an adult, piecemeal. I never binged on him the way I did with Bogart or Cagney. I would be reading about John F. Kennedy, say, and then watch “Seven Days in May,” which Kennedy thought plausible as a potential American coup. Martin Scorsese's film history doc led to “The Bad and the Beautiful” and “Two Weeks in Another Town.” An interest in film noir led to “Out of the Past.” Did I see “Paths of Glory” before I wrote that piece for The Believer? I think so but I didn't realize how good it was until then. And “Spartacus” just once? On a big screen somewhere?

When I was growing up, Douglas' great films were considered “Lust for Life” and maybe “Champion.” Now it's the ones I just mentioned. Via IMDb's user ratings:

He made the most of his 1950s movie stardom but stumbled after the mid-1960s. Burt Lancaster, his partner in crime, the Wyatt Earp to his Doc Holliday, kept getting memorable roles in memorable films: “Atlantic City,” “Local Hero,” “Field of Dreams.” Less so, Douglas. When did he begin to realize it was no longer going his way? He kept playing military men (“In Harm's Way,” “Cast a Giant Shadow”) as much of the U.S. turned from the military. He retreated to the western (“The War Wagon,” “The Way West”) as the western was dying, then tried to hook up with one-time A-list directors like Elia Kazan and Joseph Mankiewicz for edgier material (“The Arrangement,” “There Was a Crooked Man...”). Soon he was making made-for-TV movies and playing sloppy seconds to the latest craze. Two years after “The Omen,” he found out his son was the anti-Christ in the Italian-made “The Chosen.” A year after “Raid on Entebbe,” he starred in “Victory at Entebbe.” In 1980's “Saturn 3,” he was paired with two favorites from 1977: sci-fi and Farrah Fawcett. But at least there was “Snowy River.”

He was born Issur Danielovitch Demsky, the son of a poor ragman selling wares by wagon in Amsterdam, New York. It was such a part of his identity it became the title of his 1988 autobiography: “The Ragman's Son.” His theater pal Lauren Bacall helped him get into movies, and, again, he made the most of it. Not everyone agreed. John Wayne was apparently horrified, for example, that Douglas chose to play Vincent Van Gogh. After the premiere of “Lust for Life,” he lambasted him. “Christ, Kirk, how can you play a part like that? There's so few of us left. We got to play strong, tough characters. Not those weak queers.” Douglas responded that it was all make-believe, and that he, John Wayne, wasn't really John Wayne, after all, but that just confused the Duke. Douglas might‘ve brought up WWII, since Douglas fought in it and Wayne didn’t.

Will his true legacy be helping to end the blacklist by giving Dalton Trumbo credit on “Spartacus”? Though the battle for that legacy is still being fought. And the reactionary right still disparages Hollywood every chance it gets.

Man, but look at that birth year. Imagine the world he came into and the one he left, and seeing it all.