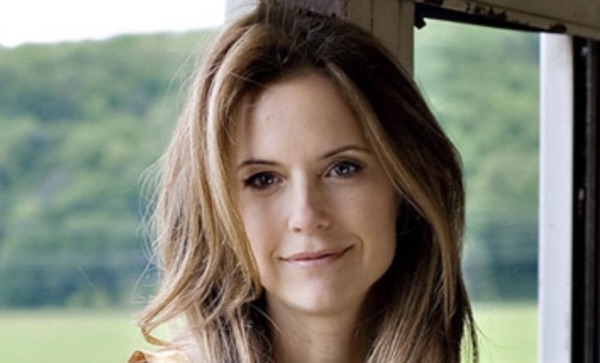 There's a scene in the 1997 movie “Addicted to Love” that I‘ll always remember.

Matthew Broderick and Meg Ryan play a pair of jilted lovers who hide out in the rundown building opposite where their former lovers have set up shop. He simply pines for his ex, played by Kelly Preston, while she wants revenge on hers (Tcheky Karyo). And I guess they do get revenge on him. They make his life miserable or something? Because he’s a snooty French restauranteur? Anyway, initially, they simply spy on the couple. She bugs the place and he sets up a camera obscura so the image from their exes' apartment is projected onto their wall. At one point, to make the image clearer, Matthew paints the wall white. Basically it looks like he's magically painting Kelly Preston onto the wall. It's a lovely scene. (You can see it here at about 3:40.)

And how lovely that Kelly Preston got to play the object of our love for once. Normally, she played the object of our lust. She shot to fame as the sexy girl—with a bit of a mean streak—who would improbably let us get to first or second base with her. Or even home? She played the point of the movie, the girl of our dreams, who would turn out to be maybe not worthy of our dreams. And by our and us I mean schleppy guys: the Doug McKeons and Matt Adlers of the world. What a scam. It was almost a relief when she was partnered with Arnold Schwarzenegger in “Twins.” Good. Quit kidding us we had a chance.

As in real life. She and George Clooney were an item. Her engagement to Charlie Sheen was short and marred by violence. Her marriage to John Travolta was long and marred by Scientology. Also tragedy: Her oldest child, Jett, was born with “Kawasaki's Syndrome,” resulting in severe allergies and asthma attacks; he died at age 16 of a seizure. Apparently she did a lot of work for CHEC, the Children's Health Environmental Coalition, a nonprofit focused on educating parents about environmental toxins adversely affecting the health of children.

I kept waiting for her to break bigger but she kept getting cast as the other girl, the one the lead needed to break free from—whether bitchy in “Jerry Maguire” or sweet in “Addicted to Love.” In my MSNBC days, about 2005, I was asked to put together a click-bait list of the top 10 sexiest actresses. She was the first one I thought of; I placed her fourth. But by then Hollywood was already casting her as the mom: “Cat in the Hat”; “Sky High.” When did I last see her? “Casino Jack” maybe? From 2010?

She died Sunday after a two-year battle with breast cancer. Same age as me: 57. Too soon. Too soon.