As you know, if you've been reading, I didn't get to see Game 3 of the World Series last night, so I missed most of the action before the final at-bat, which I've since seen on the mlb.com site. But Joe Posnanski did. And he has a few things to say about Boston manager John Farrell:

And then, Farrell made one of the oddest moves in World Series history. He let his relief pitcher, Brandon Workman, hit. It is not often that you see a manager make a move, especially in the World Series, that is inarguably stupid. Even the moves most people might disagree with — a shaky bunt decision, a questionable pitching change, an ill-timed intentional walk, whatever — will have its counterargument. But hitting Workman was one of those moves that has no counter. It was just a brain cramp by the guy who will probably win manager of the year. It’s hard to believe that somebody, anybody, didn’t stop him from doing it. ...

But he doubled down on that blunder in the ninth inning. He decided to hit Workman because, he said, he NEEDED Workman to pitch more than one inning. This was pure nonsense. Everyone in the entire world knew that as soon as Workman gave up a single or a walk or anything else to put a runner on base, he would get yanked and closer Koji Uehara would come into the game. So, Farrell absolutely DID NOT need Workman to go more than one inning, and had no intentional whatsoever to stay with him if he got into even the mildest trouble. Farrell batted Workman because he was not thinking clearly.

And, what’s worse, as you know, the Red Sox had one of the better hitters in baseball, Mike Napoli, just SITING ON THIS BENCH. Two innings earlier, Farrell proved willing to play havoc with his defense just to give Will Middlebrooks the puncher’s chance of hitting an unlikely home run. But in the ninth inning of the World Series, he hit his pitcher instead of Mike Napoli — still boggles the mind — and again his explanation was as baffling as the move. He said he wanted to hold Napoli back because he thought the game would get into extra innings and the pitcher’s spot might come again. This is just so bizarre you don’t even know what to say.

Then he gets on him again for the non-intentional walk in the bottom of the 9th:

As it was, the Cardinals had runners on second and third, one out, and Jon Jay came to the plate.

Joe P. also comes down on the side of umpire Jim Joyce for making the right call. He comes down a bit hard, I think, on Will Middlebrooks for the Matt Holliday double in the 7th, but he's right about Middlebrooks futile attempt to stay on the bag in the 9th. There was no force. The ball gets by it's the game. Why do it? 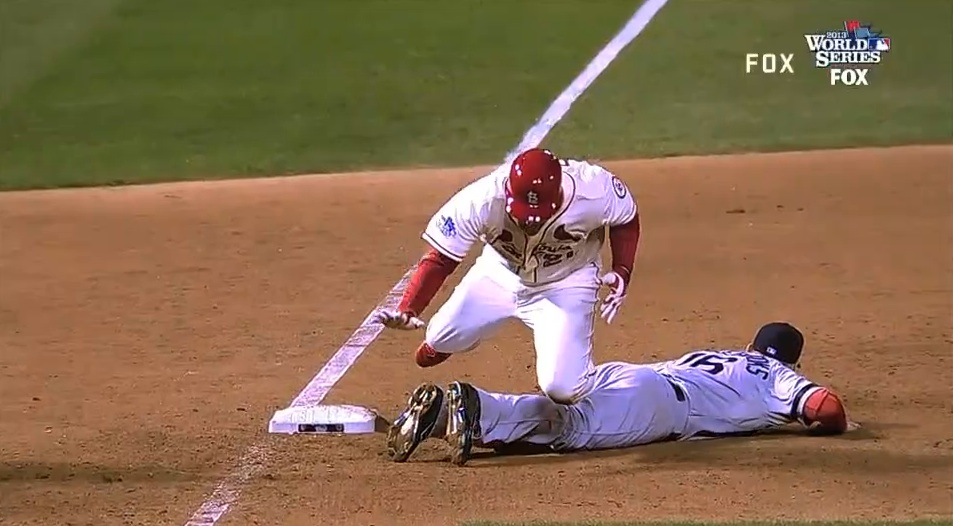 According to Posnanski, the stumblebum was Boston manager John Farrell.