The following is from Bill Pennington's extensive bio, “Billy Martin: Baseball's Flawed Genius,” which is fun to read. As a Twins fan, however, this passage was not:

[As a scout, Billy Martin] begged the Twins to sign a young high school pitcher from Scottsdale, Arizona, he had scouted even though the pitcher, James Alvin Palmer, wanted the princely sum of $50,000 as a bonus. Billy himself had negotiated the deal and the Twins would have first dibs. Billy insisted it would be worth it. But [Twins owner Calvin] Griffith balked. 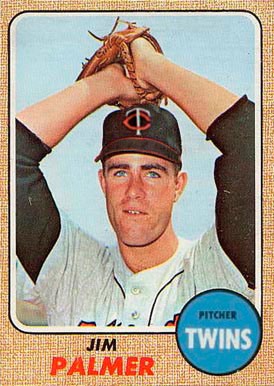 Your mind immediately clicks into “What if?” territory.

So if the Twins had signed Palmer ... could he have helped them win the 1965 World Series? Probably not. Palmer was a 5-4 rookie, and pitching wasn't really the Twins problem against the Dodgers. Or their pitching wasn't the problem. Sandy Koufax's was.

What about '67? The Dream Season for the BoSox, who won the four-way tie for the AL crown. Surely Palmer would've helped the Twins win two or three more games, and thus the title. Well, maybe. But that was the year he got injured for a season and a half.

1969 is when it gets interesting. Palmer returned, went 16-4 with a 2.34 ERA for the Orioles, who won 109 games and swept the Billy Martin-led Twins in the newly devised American League Championship Series. But put Palmer on the Twins instead of the O's? Does the balance shift? Do the Twins go the World Series against the Mets? And do we keep Billy Martin as manager as a result? And is it the Twins pitching staff that suddenly becomes acclaimed? Three Jims and a Dave: Palmer, Perry, Kaat and Boswell. I might've grown up cheering on a championship team. I might've grown up feeling like a winner.

Instead, poor Palmer had to settle for a 268-152 Hall-of-Fame career, in which he won three Cy Young awards and the hearts (or something) of women everywhere with his '70s underwear ads. During his reign, the O's won six pennants and three World Series Championships. The Twins during the same period won bupkis. They would have to wait until three years after Palmer retired before they won their first championship. All because of a $50,000 bonus.

There's a reason Charlie Brown is from Minnesota. Rats.