One recent afternoon, going link to link on IMDb.com, I landed on the page for “Invasion USA” (1952). (“It will scare the pants off you!” ... Hedda Hopper) I was intrigued because that's also the title of a truly awful Chuck Norris movie from the Reagan-era 1980s. I wondered if this film, from the most frigid part of the Cold War, was its predecessor. Seems so. From IMDb's synopsis:

A group of people at a bar witness the unfolding events of a Soviet invasion of the USA.

It's also apparently worse than the Norris film. It has a miniscule 2.3 IMDb rating (Norris' film is at 4.8), and it's the butt on an entire MST3K program. That takes doing.

So why am I writing about it? I noticed that both 1950s-era Lois Lanes are in it. Noei Neill plays “Second Airline Ticket Agent” (although “First Airline Ticket Agent” doesn't make the cast list), while Phyllis Coates, higher billed, plays Mrs. Mulfory. The female lead is Peggy Castle, who mostly made B-pictures. Gerald Mohr is the lead. “War or no war,” he says in the trailer, “people have to eat and drink ... Or make love.” Then he grabs Ms. Castle and plants one.

Edward G. Robinson, Jr., son of, has a bit part as a radio dispatcher. It's his first screen role. He was in 23 pictures and died in 1973 at the age of 40. There's a million sad stories on IMDb.

I was hoping the two Lois Lanes had a scene together but it doesn't look like it. Neill is in this clip in which she has to tell a woman that Gardner Field, Montana, where she hopes to join her husband and children, has been attacked by an A-bomb. “All flights to Gardner Field have been discontinued ... permanently.”

Here's the trailer. SEE ... NEW YORK DISAPPEAR! SEE ... SEATTLE BLASTED! And don't miss the Peter Lorre-type trying to foment revolution against the boss until the U.S. Army comes through the door!

Two Lois Lanes but no Superman. No wonder the USA was invaded. 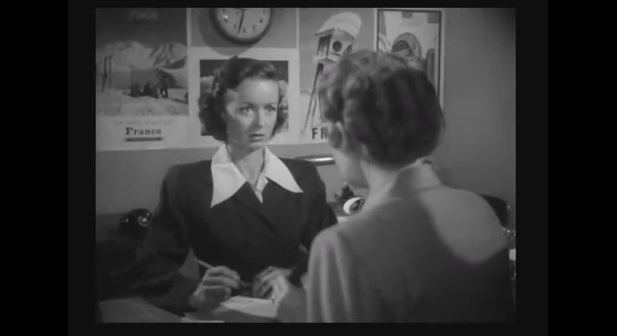 “All flights to Gardner Field have been discontinued ... permanently.”