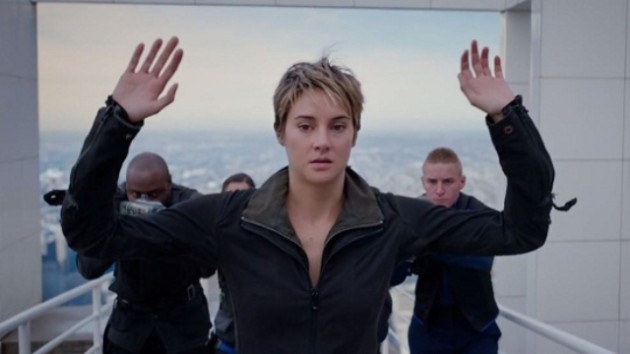 Here's a thought: Let's give Shailene Woodley a haircut so she looks like a 38-year-old woman.

A year ago, “Divergent,” despite poor reviews (41% on Rotten Tomatoes), opened to $54.6 million domestic and topped out at $150 ($288 worldwide). This weekend, its sequel, “Insurgent,” despite poorer reviews (32%), opened to about the same: $54 million. That doesn’t exactly hurt but it doesn’t exactly help, either. Sequels to good products are supposed to do better than the original. But “Divergent” isn’t a good product.

Of note: the top four openers so far this year have all been women- or children-centered:

“The Gunman,” with Sean Penn, Javier Bardem and Idris Elba, fared poorer at the box office than “Insurgent” ($5 million, fourth place), which was expected, but also poorer with the critics (14%), which wasn’t.

The other big opener, “Do You Believe?” which attempts to redo “God’s Not Dead” without the culture-war nastiness (pairing old TV stars with heavy religious themes, but with a focus on the positive works of Christ rather than the negative works of atheistic professors), didn’t exactly knock the socks off Christian moviegoers: It grossed $4 million in 1,320 theaters, which is worse than “GND” ($9 million) and “When the Game Stands Tall” ($8 million), but better than “Left Behind” and “The Identical” ($2 and $1.5). Question: How many of these crappy Christian movies have to open before Hollywood is no longer viewed as Sodom and Sodom by the Christian right? I’m guessing no amount will change that mindset.