It's the last day of the regular baseball season and we know who the 10 playoff teams areùif not yet division winners. A's and Rangers are tied in the AL West. The O's are one game back of the Yankees (Suck) in the AL East. This isn't your last year's playoffs, either. The two wild cards play each other in a one-game death match and no team wants that so every team wants the division title. So they fight on.

The top third is well-represented, with five of the 10 playoff teams, including, of course, the “Hey Big Spender” team, the New York Yankees (Suck), which outspent every other team for the 14th year in a row. At least this year the gap between the Yanks and the No. 2 team isn't exorbitant. You couldn't fit the entire payroll of another team in the gap, for example. Just half of an entire team's payroll. So: progress.

The middle tier is well-represented as well, with four plucky teams.

How did Billy Beane of “Moneyball” fame do it again? Does anyone know? How did this team do it?

Pitching, mostly. And luck. There's always luck. This is baseball.

Beane is definitely not using the traditional “Moneyball” stats. The Oakland A's, as a team, rank 11th (of 14 AL teams) in OPS, 9th in SLG, and 12th in OBP. They're speedy. They're tied for 3rd in triples, tied for 5th in stolen bases, and 2nd in stolen-base percentage. They rank first in strikeouts (1,381) but second-to-last in grounded-into-double-plays (97). They rank last in ground balls and ground-ball-to-fly-ball ratio. They're speedy guys who hit the ball in the air and strike out a lot. No one knows their names.

The pitching is easier to understand. Sort of. The team ERA is second-best in the AL, to Tampa Bay's, who won't be continuing. Oddly, the A's pitchers don't strike out many: they rank 12th there. But they have the second-best batting average against. How often does that happen? A lot of balls are in play but they just don't land?

Either way, I hope the A's keep on. I want to watch them play. I want to know their names.

I have my rooting interests, which aren't solely based on inverse payroll. Goes something like this:

Then there's the middle tier, about whom I shrug at this point. Maybe the Reds over the others.

Then there's the bottom tier. You know that one: 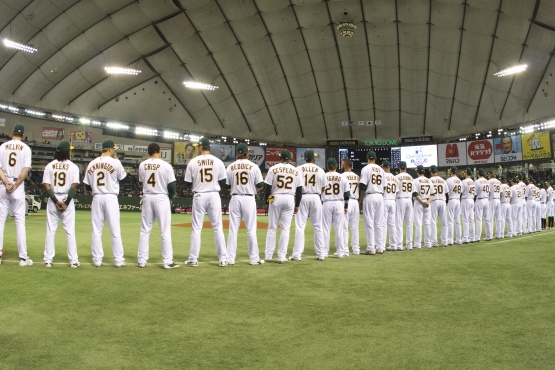 The 2012 Oakland A's, at the start of the season, in Japan, against the Mariners. Who knew?