Key play: Bird clipped in the 5th. As The Wire‘s Omar said, “Just Bird to me.”

Yesterday, Saturday, we had plans to see the Andrew Wyeth exhibit at the Seattle Art Museum with our friends Vinny and LoLo and we stayed until around 5:00 (gametime), and then we went out for drinks and dinner until around 7:30. I could‘ve watched then. But I didn’t. I didn't even go online. I left my phone off. Like all the way off. The day before a friend, who was a Yankees fan, texted me some snide comment mid-game, and I didn't want to know, so I turned the whole thing off that night and the next night. I didn't want to jinx it.

All because I'd checked the score on ESPN.com.

I don't know why baseball fans are like this but some part of me was thinking that. No, not thinking. Feeling. Stupidly feeling. I just had that awful feeling in the pit of my stomach. So when the games went back to Houston, with the Yankees up 3-2, I decided not to watch. I didn't want to jinx anything. Last night, when P and I got home, I suggested we watch “Minority Report,” which I hadn't seen since it was released, and which some people feel is a great movie. (It's not.) Before then, Patricia wanted to show me a video of something someone shared on Facebook, something about corgis, and I told her no, not going to look. Couldn't risk it. Couldn't risk even that proximity to social media. Instead the movie. We watched half of it, before I grew tired, got in bed, read a bit of “The Snowman,” fell asleep with Jellybean on my chest. Woke up, fed Jellybean, made coffee, brushed my teeth while listening to NPR, and in the midst of the usual horrid Trump news, they gave us their World Series announcement.

They took their sweet time getting there, but even that was a good sign. If the Yankees had won, after all, that would be the lead. Yankees Yankees Yankees. Instead, they announced that the World Series would begin on Tuesday evening (right...) with the Los Angeles Dodgers representing the National League (OK...) and representing the American League (c'mon already...) ... the Houston Astros, who beat ...

It was all I could do, at 6 AM in our condo on First Hill in Seattle, not to scream for joy. 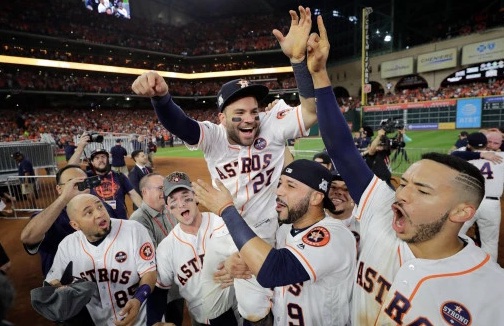 Tags: Yankees Suck, Baseball, Houston Astros, World Series
Posted at 08:19 AM on Sunday October 22, 2017 in category Yankees Suck
« NPR's Ron Elving Knows What He Signed Up For   |   Home   |   Which Team is the Biggest Yankees Killer of the 21st Century? »