Last week Brandon Gray over at boxofficemojo.com pointed out that November's box office was down by 10% compared with last year, while actual attendance hit a 15-year low.

Just last month, a rival site, boxoffice.com, predicted the third in the “Chronicles of Narnia” series would open at $36 million, while the Johnny Depp/Angelina Jolie thriller, “The Tourist,” would come in second at $32 million. It got one thing right: Both films finished 1 and 2. The numbers were slightly off, though: $24.5m and $17m.

“The Tourist”'s numbers are also surprising. The last time a Johnny Depp film opened in more than 2,000 theaters and made less money opening weekend was in October 2001, pre-Capt. Jack Black, when “From Hell” grossed $11 million a month after 9/11. Even “Secret Window” in '04 grossed more opening weekend.

Neither “Narnia” nor “Tourist” was well-reviewed, by the way. Top critics gave “Narnia” 48% and “The Tourist” just 7%. Word gets around, times are tough, presents need to be bought. Better movies are coming. 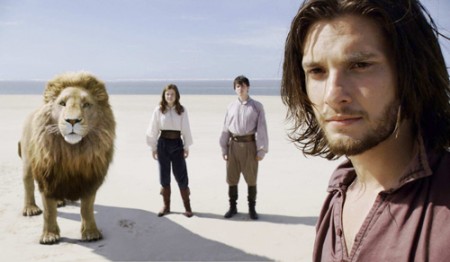 They've killed their God. Or at least their God's franchise.