It's such a Baseball 101 moment that it came up in the first inning of the first baseball game my Lebanese friend Robert ever went to:

“So what if the ball is outside the strike zone and the batter swings and misses?” Robert asked. That's a strike, too, I said. “What if the ball hits the batter?” That's a hit-by-pitch, I said, and the batter goes to first base. “So how come the batter gets out of the way?” he asked. “Doesn't he want to go to first?” Well, I said, if the umpire thinks he didn't try to get out of the way, then he might not let him go to first base. Besides, it would hurt. The ball is small and hard and thrown between 85 and 100 miles per hour. “Yes,” Robert agreed. “That would hurt.”

I should have added: It's a rare call when a batter is hit and the ump doesn't award him first base. He has to be pretty blatant about not getting out of the way of the pitch.

Was José Tabata blatant about not only not getting out of the way of a 2-2 slider from Max Scherzer, who was working on a perfect game with two outs in the top of the ninth? In real time, it's tough to see what's going on but when you slow it down it's obvious that not only did Tabata not get out of the way, he kind of leaned into it. On purpose? To break up the perfect game? Or because we tend to meet conflict halfway?

Either way, he got first base. So instead of Max Scherzer becoming the 24th pitcher in baseball history to toss a perfect game, he became, a batter later, the 289th to throw a no-hitter.

Oh, and despite what I said to Robert, it didn't look like it hurt all that much, either. I've seen articles all over the place today, saying “Blame the umps” or “Don't blame Tabata” but maybe the argument should be “Blame the elbow pads.” Because if his elbow had been unprotected? Jose Tabata might've actually tried to get out of the way of that pitch. 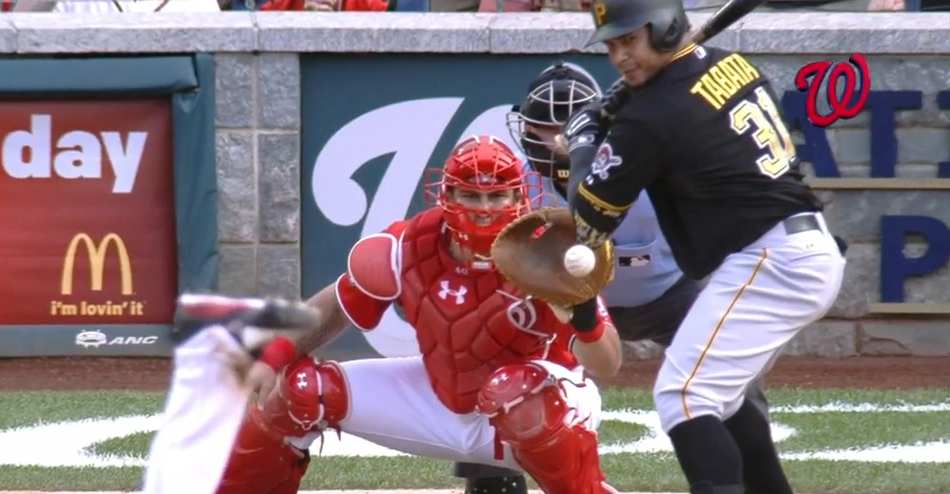