Is this a resonant headline or what? Sadly so. 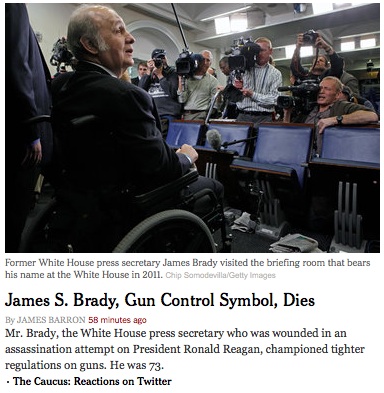 “Gun Control Symbol Dies.” Apparently in Alexandria, Va., too, and not in committee.

Brady, of course, was press secretary to Pres. Reagan, when, in March 1981, John W. Hinkley fired on the president and his entourage outside a Washington, D.C. hotel. One of the stray bullets entered Mr. Brady's brain. For the rest of his life, his left arm was paralyzed, his left leg weak, and he suffered short-term memory loss.

As a result, he became a gun control advocate, and lent his name to the Brady Act, an amendment to The Gun Control Act of 1968, which Congress passed in 1993—the year before the Gingrich midterms turned everything bad. Five years later, the brunt of the Brady Act was struck down by the U.S. Supreme Court. In Printz v. United States, the 5-4 majority ruled that it was unconstitutional for the federal government to demand the assistance of local government officials in creating a national handgun database. However, the database was created anyway, as local officials didn't mind complying with federal requests.