Going About My Business After Boston

I have no insight, no wisdom, about the bombings that took place at the Boston Marathon yesterday. I heard about it relatively early, followed it for about an hour, then did what we all have to do: I went back to work. I continued to write. I did the laundry. I changed those two light bulbs in the kitchen. I fed Jellybean at 6 and again at 8. I read my friend John Rosengren's biography of Hank Greenberg.

Monica Guzman, columnist with The Seattle Times, tweeted about the bombings yesterday at 2 pm. She'd just heard. She was horrified. An hour and fifteen minutes later, she tweeted this:

“Still.” We want zip-zip in this culture. The future is now and now is so 10 minutes ago. We keep trying to keep up with the nothing that's yet to happen.

But there are obvious dangers in rushing to answer. Here's the initial report from The New York Post: 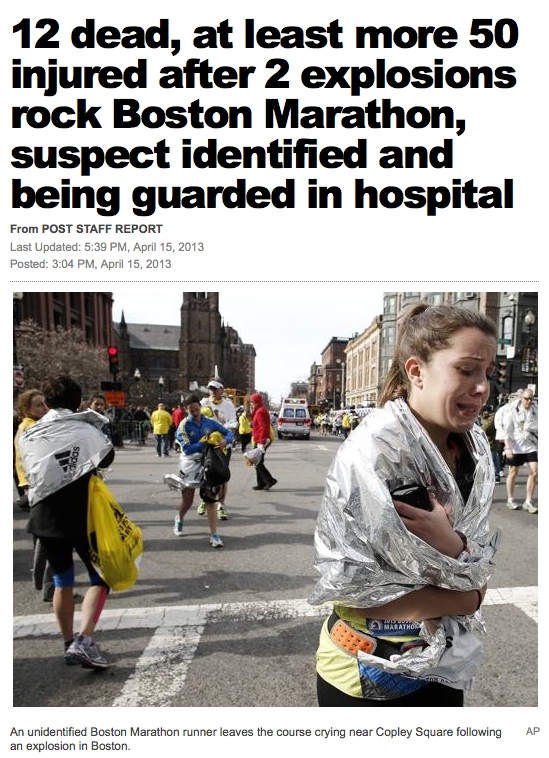 The Post ran other headlines: “Authorities ID suspect as Saudi national...” They kept these headlines up long after we knew that 2 (later 3) were dead and the Saudi national wasn't a suspect.

For a time, people thought the JFK Library had been attacked, too. That was an electrical fire, apparently.

I tend to slow down in moments like these. It seems like the rest of the world gets frantic and angry and demands answers while I just slow down and get sad. I know I'm far away from the scene. I know I'm just experiencing all of it through media. I know real tragedy is happening to real people, as it does every day, but I'm here, viewing it through a screen, and can't help. Wringing my hands doesn't help. So I go back to work. I follow the directive of the cop at the scene: I go about my business.