George W.S. Trow on 'All About Eve'

“All About Eve is a good marker in that it describes a shift from a Broadway and Hollywood studio reality to a television reality, and also a shift from a society of vanity, epitomized by Mankiewicz's heroine, Margo Channing, played by Bette Davis, to a society of narcissism, the Anne Baxter character, Eve Harrington.

“Well, so it was in 1950, and it's just a useful social marker, and I always want to refer to Diana Vreeland's famous remark, 'I loathe narcissim; I approve of vanity.' The shift from a society of vanity to a society of narcissim—not a small shift, vanity being one of those things, like sexuality itself, that humans are called upon to accept as part of their condition, and narcissism being something from another planet—and Mankiewicz is indicating not just that there's a devolution in American character but that this devolution is henceforth going to be at the top fo the American cultural hierarchy. I take Manciewicz's film very seriously, more seriously than I take Citizen Kane, which is a theatrical fantasy.” 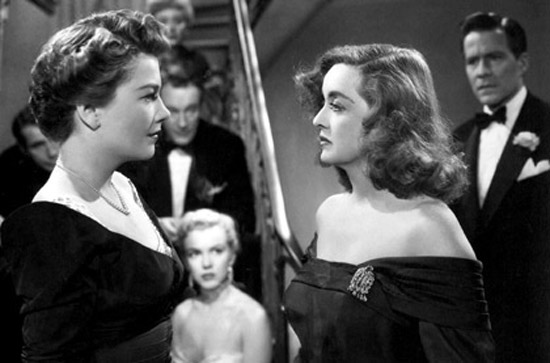 Narcissism (left) takes over from vanity (right), with television in the middle.