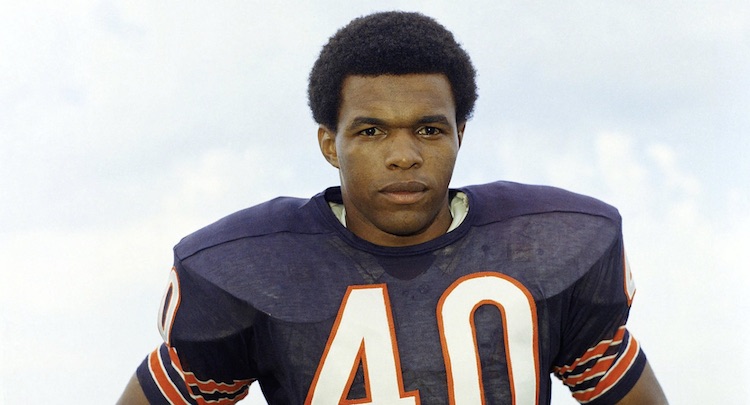 A couple of times a year I'll think the following:

That's a quote from the back cover of the dog-eared autobiography of Gale Sayers, “I Am Third,” that my older brother owned. I was a huge fan of baseball biographies but I never got into this one for some reason. I don't know if I finished it. But I always liked the title. And though I'm basically agnostic I always liked the sentiment.

My older brother did a good imitation of Sayers, too. OK, not Sayers. Billy Dee Williams as Sayers in the TV movie “Brian's Song,” which was based on some portion of “I Am Third.” Every boy I knew saw that movie. Every boy I knew cried at that movie. Whenever some kid claimed he never cried, that's the thing you'd bring up.

I certainly cried at “Brian's Song.” The theme song alone could make me tear up. But the scene that killed me was when Billy Dee as Sayers breaks down in the locker room talking about his friend Brian Piccolo, who had been diagnosed with cancer. One of the lines in that speech is the line my brother spoke when imitating Billy Dee/Sayers: “Brian Piccolo is sick, very sick.” I think about that line a couple of times a year, too.

Gale Sayers and Brian Piccolo became roommates and friends at a time of civil rights and civil strife, so it was a story, a news story, before it ever became a memoir and a TV-movie. They were roommates and numerically adjacent—Sayers #40, Piccolo #41—but opposites every other way. White, black. Brash, shy. Journeyman, superstar. Who couldn't write that story? And then the tragedy. Brian Piccolo was 26 years old when he died of cancer in 1970. Gale Sayers was 77 when he died yesterday of complications from dementia and Alzheimer's. That's a whole other tragedy, and probably football-related. He was diagnosed with it in 2013. Imagine if it were you. A doctor saying you will lose your mind before you lose your life. You will lose your self. Everything you think is you. But you'll still be there.

When I was a kid, Gale Sayers was the standard. I came in at that time. Jim Brown had already been making movies for six years when I began to pay attention to the NFL, and I thought of him the way I thought of someone like Y.A. Tittle: Someone from the dark ages: BSB—Before Super Bowl. But if you look at the numbers it's not even close. Brown dominated for a decade and then left on top with the most rushing yards ever, while Sayers dominated for four years basically and was gone. But he was beautiful in a way few football players ever were. He was already a college legend when he arrived in the NFL in 1965—the Kansas Comet—and he quickly became a football legend. “Give me 18 inches of daylight, that's all I need,” he was famous for saying, and he wasn't wrong. In his rookie season, in the mud of Chicago, he scored six touchdowns against the San Francisco 49ers in a 61-20 romp; nobody's done that since. The next season, he led the league in rushing yards and yards per game. Then he got injured. Knee. But he came back in 1969 and led the league in yards and yards per game. Then he injured the other knee and that was that. To be honest, I don't think I ever saw him play live. I saw him on “NFL Films” and on “Brian's Song.” My father repeated his name with reverence. He did an intake of breath and shook his head sadly and reverentially.

In his tribute, Joe Posnanski compares Sayers to Clemente in terms of beauty and impact, and it's not a bad comparison. Except Clemente actually had a full career; he played 18 seasons. Poz also suggests Sandy Koufax, another comet streaking across the sky, someone who blazed for a glorious moment and was gone. Again: not bad. Let me add another: Tony Oliva: showed up in the mid-60s and dominated: two batting titles in his first two years, a beautiful swing, a gorgeous player. Then knee troubles. Then another batting title. Then more knee troubles. Sayers showed up after Tony-O and left before him because football is that much more brutal, but he also got in the Hall almost immediately. Baseball's Hall still hasn't let Tony in. Maybe because he never quite had that cache. Or maybe because football knows its careers are short and brutish, and so, more than baseball, they appreciate the clean, clear leap of the salmon that has disappeared.