Here's a key passage in Frank Rich's review of Rick Perlstein's much-anticipated third volume of modern conservative history, “The Invisible Bridge: The Fall of Nixon and the Rise of Reagan”:

The key to Reagan’s political success, in Perlstein’s telling, was that he recognized what many Republicans did not — that Americans craved “a liturgy of absolution” and “an almost official cult of optimism” postulating “the belief that America could do no wrong” or “that if America did it, it was by definition not wrong.” That’s why Reagan stubbornly insisted on minimizing the crimes of Watergate even though polls suggested he might be punished for it and even after most of his ideological soul mates jumped ship. That’s why Reagan never stopped insisting that we came home from our humiliating defeat in Vietnam “as winners.” He propped up such illusions by ignoring facts or inventing them. But the will of his listeners to believe — and his gift for making them feel good in his presence — conquered all.

Which ... yes. But what does that remind you of? Absolution and optimism? And, I would add, absolutism? And belief at the expense of truth? What industry is that? What city? What industry and city was Reagan steeped in, after all?

Why, Buddy, it's Hollywood. It's so-called liberal Hollywood, buddy.

For more on Reagan, Hollywood, optimism and innocence, see this. 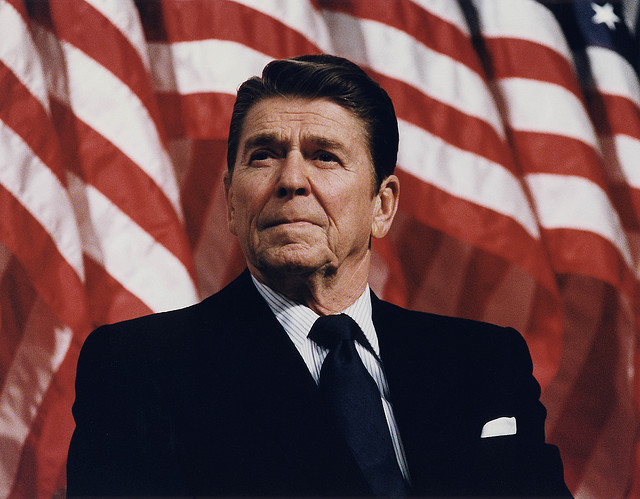 It came from liberal Hollywood.