Flash: Rush Limbaugh Has No Genitalia!

Frank Rich has a piece in this morning's New York Times on Obama's squandered summer. It's a good piece. He talks up Obama's m.o.: Let everyone else rachet up the rhetoric until it becomes intolerable, and then come in, cool and calm, and direct things like an adult. He did it during the campaign—to both Hilary and McCain—and he's done it now with the health care debate.

Rich wonders if it's worth it. Couldn't he have made that speech in June? Why did he let the inmates take over the asylum all summer? Rich says that m.o. is good for winning elections but bad for making policy. It's a particularly bad method when your party dominates the executive and legislative branches of government. Get involved. Now. Don't stay above the fray. Be yourself but direct things daily, rather than seasonally. 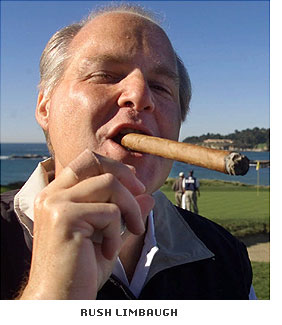 I tend to agree. There's a stink from the idiocy of this summer that may never wash out. You elect a president, in part, because his is the voice you want to hear every day for the next four years, and I haven't heard enough from Pres. Obama. The voices that seep through tend to be the crazy conservatives, elected or not: Sarah Palin, Michelle Bachmann, Glenn Beck, Rush Limbaugh, Sean Hannity, Dick Cheney, the LaRouche-ites. Joe Wilson.

Here's a question for Frank Rich, though:

I've used this example many times before but one more time won't hurt. Say I'm a nationally known media figure in the political realm. Say I've got my own show. And then I say the following:

Rush Limbaugh has no genitalia. Literally. He just has a ball of fluff between his legs.

Not in a serious country. But in this country?

Here's the beauty of the accusation: Not only is it sensationalistic, not only is it “sexy”—since it deals with sex, or the lack of it—but it can never be proven without Limbaugh demeaning himself greatly. So it stays out there. Does he or doesn't he? Well, his wife says he does but should we believe her? Can't we hear from an objective source? Is there an objective source? And is that why he smokes those big fat cigars—as compensation? Why can't we get a definitive answer on this! It's the shouted whisper campaign.

And it's no more absurd than half the stuff I've heard this summer.

Look at Tobin Harshaw's “Opinionator: A Gathering of Opinion from Around the Web” in Friday's Times. It's all about Joe Wilson shouting “You lie!” during the president's speech on Wednesday.

Harshaw begins by taking “The Hill,” a Capitol Hill liberal newspaper, to task, for its weak response. Then he writes this:

So what’s the point, exactly? For conservatives, it’s that another reflexively liberal publication is trying to tarnish a new straight-talker.

Straight talker? Why is Harshaw allowing conservatives to frame the debate this way? He even quotes from FOX News:

You know what else it doesn't restrict? Rush Limbaugh from getting a faux-penis to cover up his lack of genitalia.

Just because something isn't restricted doesn't mean it's allowed. Shouldn't Harshaw mention that? But he doesn't. He blabs on. He's got this important platform and he talks about everything that doesn't matter: the conseratives who condemn Wilson; the liberals who support him. Then he ends it with such a facile close I'd edit it out of one of my publications, which is a trade publication, and not The New York Times.

We used to live in an echo chamber. We now live in an outragegous chamber. The more outrageous the behavior the more likely it is to get covered. And the feces go flying.

I tend to agree with Frank Rich in his column today. It just seems bad form to complain that Pres. Obama—the custodian-in-chief—is cleaning things up seasonally, rather than daily, when most of Rich's colleagues are doing everything they can to keep the feces flying.