Recently I finished a rare read for me: a true-life crime thriller. It's also a not-so-rare read since it's set in the early days of Hollywood. 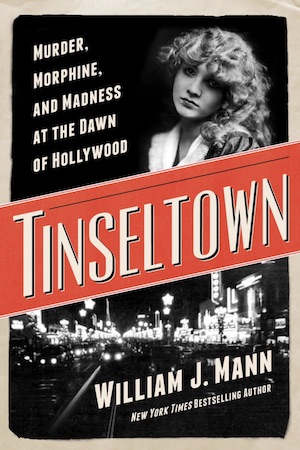 William J. Mann's Tinseltown: Murder, Morphine, and Madness at the Dawn of Hollywood is about the unsolved 1922 murder of William Desmond Taylor, a director at Famous Players-Lasky, which became Paramount Pictures. Some of the key figures Mann writes about include:

The last three are friends and acquaintances of Taylor—and suspects in his murder.

(Typing out the above, I suddenly wondered if the writers of “Sunset Blvd.” got the name “Norma Desmond” from some combo of Desmond Taylor and Mabel Normand. According to IMDb, that's half correct. Yes to Desmond but Norma was after Norma Talmadge, whom IMDb claims was romantically invovled with Taylor. That would be news to William Mann, who says Taylor was a closeted homosexual.)

The Roscoe “Fatty” Arbuckle scandal is peripheral to the main storyline but it's the part that felt disturbingly contemporary. A girl, Virginia Rappé, died at one of Arbuckle's parties, and he was eventually charged with manslaughter. The gossip against him was frequent and lurid while the evidence against him was so nonexistent his lawyer asked the judge to dismiss the case altogether. But the judge didn't—and in the worst way. “We are not trying Roscoe Arbuckle alone,” Judge Lazarus declared. “In a large sense, we are trying ourselves. We are trying present-day morals, our present-day social conditions, our present-day looseness of thought and lack of social balance.”

Good god, what a pompous, unjudicious declaration. As a result of such grandstanding, Arbuckle was forced to sit through three trials—two ended in hung juries—while his career dissolved. Mann writes:

Overnight, Arbuckle vanished from the screen. At the Manhattan Opera House, a rerelease of one of his shorts with Mabel, Fatty and Mabel Adrift, was scrapped at the last minute. When a title card announced that “in view of public feeling due to the San Francisco affair, it was deemed advisable to substitute another subject,” the audience erupted in applause. That broke Mabel's heart. It also terrified her. Because if they were gunning for Fatty today, she might be in their crosshairs tomorrow.

And that's the part that felt disturbingly contemporary to me. The terror Mabel Normand felt. I flashed on the #MeToo movement and cancel culture. These later movements are more legit, of course, and have led to a much-needed recalibration in Hollywood and elsewhere; but as #MeToo gained in power it widened its reach and ensnared and ruined the lives of those it shouldn't have: Al Franken, Aziz Ansari, maybe Garrison Keillor. One accuation was often enough—or several vague ones. Many people still assume—vehemently so, brooking no opposition, caring about no evidence—that Woody Allen is guilty even though he's the one who's been proven not so, and even though his son, Moses, has written eloquently in his defense.

Even after Arbuckle was acquitted, the media noise against him stayed strong. The New York Times editorialized: “Arbuckle was acquitted by a jury, but an odor still clings to him.” Will Hays compared the outrage to the Dreyfus affair but he hoped it would dissipate. He didn't want to be a censor; he believed in both the free market and that whole “innocent until proven guilty” proviso. And most people, according to Mann, were ready to welcome him back:

Every time working people, young people, blacks, and immigrants were offered a say in the matter, Fatty triumphed. The Kansas City Journal polled its readers, and the results came back ten to one in favor of the comedian. The same thing happened when the Blackstone Theatre in Detroit asked its audiences to vote. Yet Arbuckle's fate didn't rest with the entire public. It was decided in white, middle-class drawing rooms where the Federation of Women's Clubs took their votes, and in church halls where ministers whipped their flocks into outrages over Hollywood.

Hays did remove the ban against Fatty but outrage erupted again. In an attempt to repair the damage, he held a meeting with, among others, James West of the Boy Scouts, and Mrs. Oliver Harriman of the Camp Fire Girls (who were on his side), and  Mrs. Herbert Hoover, a national representative of the Girl Scouts, and Charles A. McMahon, of the National Catholic Welfare Council (who weren't). A “compromise” was reached. Arbuckle could work as a writer or director but was banned as an actor. Bad enough. But Mann says that Hays knew the compromise was empty:

The Federation of Women's Clubs was still vowing to boycott any film he made, whether he was in front of the camera or behind it. The National Board of Review announced that it would exclude any film directed by Arbuckle from its list of recommended films, which many communities used to decide what to show in local theaters.

What is Aziz Ansari up to these days? Anyone know?