David Cone, the '98 Yankees, and the Rewards of Self-Delusion

Reading Buster Olney's “The Last Night of the Yankee Dynasty” (recommended), I came across this:

Before games [Tino Martinez] and [David] Cone would talk about reasons to dislike that day’s opponents, a method of manufacturing a mental edge. They might focus on a rival’s quote in the newspaper, translating benign remarks into inflammatory slights, or concentrate on an annoying mannerism. “If the opposing pitcher struck out one of our hitters,” Cone said, “and pimped around the mound a little bit, we were all over him—‘Who does this guy think he is?’ ‘Is he showing us up?’ It could be something completely innocuous.” It was an old-school way of competing, Cone thought, a method of tricking yourself into a competitive fury.

What did that remind me of? Tom Verducci and Joe Torre's bookk “The Yankee Years,” and this story from the start of the '98 season:

After five games, the 1998 Yankees were 1-4, in last place, already 3 1/2 games out of first, outscored 36-15, at risk of losing their manager and letting teams like the Mariners kick sand in their faces. ... Like Torre, Cone was angered by what he saw the previous night. He watched Seattle designated hitter Edgar Martinez, batting in the 8th inning with a 4-0 lead, take a huge hack on a 3-and-0 pitch from reliever Mike Buddie—five innings after Moyer had dusted [Paul] O'Neill with a pitch.

So Cone led a team meeting in which he worked himself into an angry froth over the supposed slights by the Mariners: Edgar swinging on a 3-0 pitch when his team already had a massive 4-run lead, and Jamie Moyer plunking Paul O'Neill with either his 84-mph fastball or his 68-mph changeup. And it worked. They went out and beat the M's and changed things around. The two teams respective trajectories changed after that: the M's down, the Yanks up.

Not sure what the lesson is here. Other than the rewards of self-delusion. 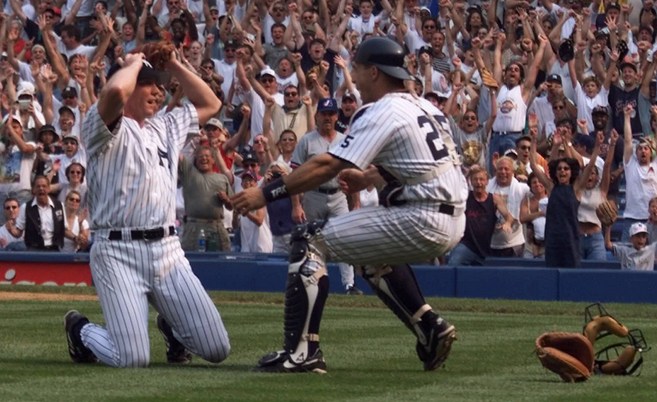