Some legit news organizations have figured it out. They've realized that bending over backwards to “both sides” an issue or event, particularly where one side is extreme, egregious or just plain dumb, isn't doing anyone any good: readers, viewers, participants, accountability, American democracy, the truth. Even The New York Times is improving: 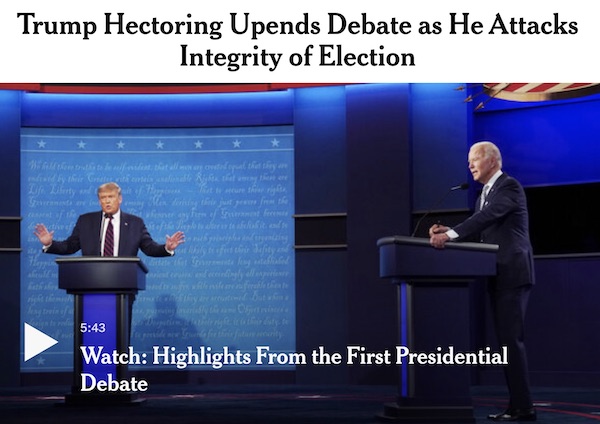 And others, like Rachel Martin and “Morning Edition,” still haven't figured it out.

The morning after the first presidential debate of 2020, in which Donald Trump shat all over decorum, the debate format, and—again—American democracy, she began her report this way:

The first presidential debate between President Trump and Democratic presidential nominee Joe Biden was unlike any other. The orderly 90-minute debate format broke down into chaos quickly. Despite moderator Chris Wallace's warnings, debate decorum was thrown out the door. Instead, there were interruptions, cross-talking, name-calling, shouting.

I recall a Louis CK standup routine from a few years ago: a friend said something to his girlfriend “and then she got her feelings hurt.” He said a thing, she got her feelings hurt. Louis' line: “Could you more remove yourself from responsibility?” Let me ask that question: Could Rachel Martin and NPR more remove Donald Trump from accountability? There were interruptions? Who was doing them? Who created the chaos? Who threw decorum out the door? Both men? Of course not. It was just one. One major asshole.

And then Martin has the nerve to suggest that voters who wanted “a clearer understanding of the candidates' policy positions” were out of luck. Right, Rachel. Same with listeners of your broadcast.