Charters and Caldicott and the “Night Train to Munich” (1940)

The other night Patricia and I were watching a not-bad film from 1940: Carol Reed's “Night Train to Munich,” starring Margaret Lockwood and Rex Harrison. Not sure why I rented it. Probably Carol Reed.

After the German takeover of Czechoslovakia, the Allies manage to secret out of the country an inventor of a better kind of armour plating, Axel Bomasch (James Harcourt), but his daughter,  Anna (Margaret Lockwood), still veddy veddy British, is captured and placed in a concentration camp. There she encounters a dashing freedom fighter, Karl Marsen, played by Paul Henried, who, two years later, would play the most dashing freedom fighter of them all, Victor Laszlo in “Casablanca.” Even so: knowing it was still early in the film, knowing Lockwood's true co-star was Rex Harrison, and seeing that Henried was billed as Paul von Hernried, I thought, “He's a plant. He's a spy. To get to her father.” As he was. As they did: secreting him and daughter back out of Britain and to Germany just before Sept. 1, 1939.

Ah, but intrepid agent, Gus Bennett (Harrison), seen to this point mostly as a boardwalk barker, decides to go to Berlin undercover, as Major Herzoff, monocle and all, to get father and daughter back.

I should add that I'd never seen a youthful Rex Harrison before and was fairly blown away. The movie felt run-of-the-mill until he came onscreen and then: zap! That Henry Higgins persona is already there: distant, faintly amused by it all, protected with a kind of armour plating of his own that still allows his charm-for-charm's-sake to seep through. He has a kind of flirtatiousness with women but it's wrapped in a challenge that's intellectual and dismissive rather than sexual and complimentary. “Do you have any brains at all?” he seems to be saying. “Let's see, shall we?”

At one point Lockwood and Harrison are having a great back-and-forth in her swanky bedroom in Germany, going over the escape plan. It's not much of an escape plan. He'll say he persuaded her to persuade her father to stay and work for the Germans, and while the high command is congratulating themselves they'll all make their escape via airplane in a nearby field.

Anna: But why should the admirality believe you persuaded me?
Gus: I shall indicate that once again you have succumbed to my charms.
Anna (aghast): Once again?
Gus: (pleased with himself) It happened in Prague, I'm afraid.
Anna: And you told them a fantastic story like that?
Gus: Fantastic? It was four years ago, there was a harvest moon, I was younger and more dashing then... 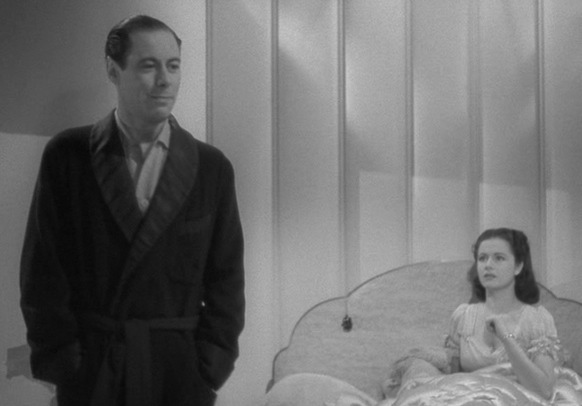 “It happened in Prague, I'm afraid.”

“Night Train to Munich” is amazingly light for a film about Nazis produced as bombs were raining down on London. Stiff upper lip and all that. They make jokes about Nazi propaganda:

“Any day now,” a Nazi officer says at one point, “Poland may provoke us into invading her in self-defense!”

There's an extended piece with two Germans that, between “Heil Hitlers,” is simply wordplay:

Both Kampenfeldt and Schwab are even less German than Rex Harrison That's part of the fun of watching cinema from other countries. Everyone does it as badly, as myopically, as Hollywood.

Following the titular train to Munich, we see, at a German train station, a man asking for a copy of “Punch,” the British humor magazine. Me to Patricia: “OK. They're not trying to pass that guy off as German, are they?” They're not. The man is British. He's frightfully put off, for example, that the Germans don't carry this week's “Punch,” and both he and his companion seem completely oblivious to the danger they're in as British nationals in Nazi Germany after Sept. 1st.  Which is about when the other shoe dropped.

“Wait a minute,” I said to Patricia. “Aren't these guys the same guys from 'The Lady Vanishes'?” A second later: “I think they're playing the same characters.” 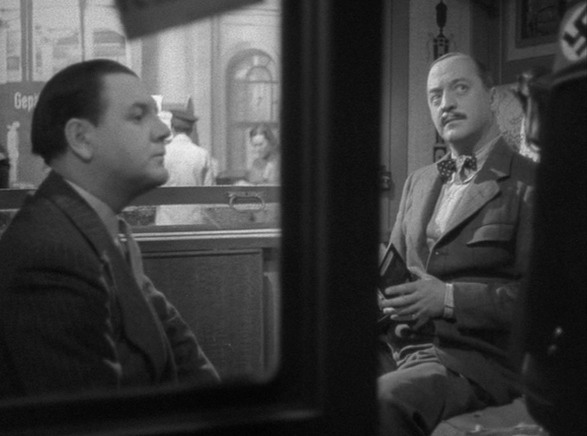 Charters and Caldicott: Terribly put out in the midst of this how-do-you do.

I'm probably the last movie critic in America to know this story. Charters and Caldicott are two obtuse, cricket-obsessed British characters, played by Basil Radford (Charters) and Naunton Wayne (Caldicott), who made their first appearance in Hitchcock's “The Lady Vanishes. They proved so popular with British crowds that screenwriter Sidney Gilliat, who had written a good half-dozen screenplays since ”The Lady Vanishes“ in '38, resurrected them for ”Night Train to Munich“ in 1940, then for ”Millions Like Us,“ about a British factory girl, in '43. They were given the lead in ”Crook's Tour“ in '41, but Gilliat wasn't involved in that project.

Apparently the actors had a falling out with Gilliant in '45 when he refused to expand their roles for ”I See a Dark Stranger“ and they walked, both away from Gilliat and the names, but not from each other. In subsequent films they played similarly self-regarding characters with different names: Prendergast and Fotheringham in ”A Girl in a Million“ (1946), Gregg and Straker in ”Passport to Pimlico“ (1949) and Bright and Early in ”It's Not Cricket.“ Radford died in 1952, Wayne in 1970, but the characters returned in a 1979 remake of ”The Lady Vanishes,“ and then on the BBC for a eponymous 1980s television series.

How well known are they? I mentioned all this to a friend at a party recently, American but an Anglophile, and when I had trouble coming up with the names he provided them. Is there an American equivalent? Abbot and Costello maybe? But they were stars, known by their own names. Statler and Waldorf maybe? Muppets. Could you do American versions of these characters? They'd probably have to be baseball fans. Football fans seem too Paul Fistinyourface to allow for C&C's dry humor:

Charters: Bought a copy of ”Mein Kampf.“ Appears to me it might shed a spot of light on all this how-do-you-do. Ever read it?
Caldicott (sucking on a pipe): Never had the time.
Charters: I understand they give a copy to all the bridal couples over here.
Caldicott: Why, I don't think it's that sort of book, old man. 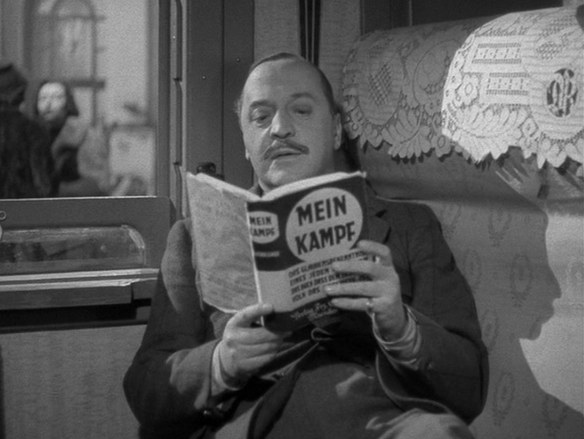 Not that sort of book, old man.

In ”Night Train,“ Caldicott recognizes Major Herzoff as Dickie Randall (Gus's real name), who used to play for the Gentlemen, a cricket club, and his questions rouse the suspicions of Karl Marsen, who's already jealous of Herzoff's apparent hold on Anna. Eventually, through the fog of their British obtusness, Charters and Caldicott realize they've put old Dickie in a bit of a spot and come vaguely to his rescue. There's a car chase, then a tramway adventure high in the Alps, but everyone makes it safely to Switzerland, where Dickie falls into Anna's arms, and, one imagines, Bomasch's armour plating helps win the how-do-you-do and Charters and Caldicott finally, finally get their copy of ”Punch."